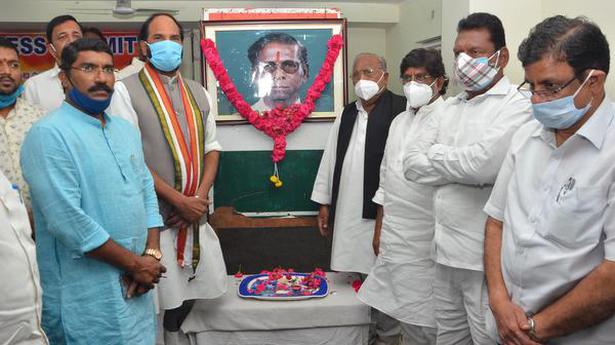 Telangana Congress leaders paid rich tributes to former MP Nandi Yellaiah and recalled his service to the party and the country as a Parliament member.

At a condolence meeting held at the party office here, senior leaders recalled his simplicity and his loyalty to the party throughout his career.

TPCC president N. Uttam Kumar Reddy expressed concern over rising commercialisation of politics, especially in Telangana and said it is time to give a serious thought over it. He said it is difficult to find leaders like Nandi Yellaiah who epitomised values, honesty and integrity in public life.

Mr. Reddy said the entire electoral process has become so corrupt that right from gram panchayat to MP-level, everyone talks only about money. He said character, sincerity and commitment to the people in public life have gone missing these days. Consequently, money is controlling the corridors of power in all sphere of public life, he said.

CLP leader Bhatti Vikramarka said getting elected to Lok Sabha six times, and Rajya Sabha twice, besides serving as Member of Legislative Council is no mean achievement for a poor Dalit leader. He said Nandi Yellaiah worked with leaders from the era of Marri Chenna Reddy to the present generation, leaving a stamp of his own in public life and the party.

Recalling his association with the late leader, former MP V. Hanmantha Rao said he was a personification of simplicity despite achieving so much in public life. Mr. Rao said he would take upon himself the task of installing a statue of the late Congress leader.

AICC secretary Sampath Kumar said no Dalit leader in the country could achieve what Nandi Yellaiah had achieved in politics. He said the party should ensure his statues are installed in Ramnagar, Siddipet and Nagarkurnool.

The Congress leaders also expressed condolences over the demise of other senior leaders Narender Yadav and Md Sirajuddin.