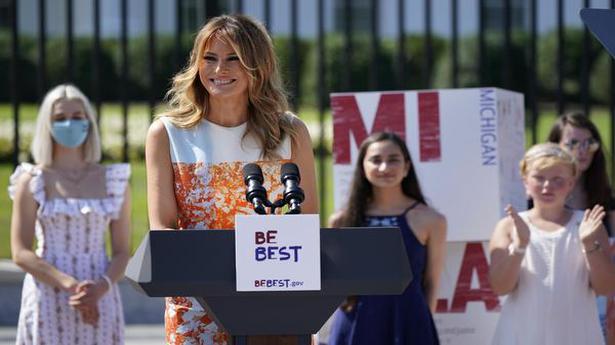 Republicans pledged to hold an uplifting convention to celebrate Donald Trump’s nomination for four more years in the White House but the mood was somber from the outset.

U.S. Secretary of State Mike Pompeo and First Lady Melania Trump address the Republican convention on Tuesday after a first night that featured depictions of a United States under a Joe Biden presidency that veered between the hyperbolic and the apocalyptic.

Republicans pledged to hold an uplifting convention to celebrate Donald Trump’s nomination for four more years in the White House but the mood was somber from the outset.

Kimberly Guilfoyle, 51, a former Fox News host and the girlfriend of Donald Trump Jr, described the November election as a “battle for the soul of America” — echoing a phrase former vice president Biden has used during his campaign.

“They want to destroy this country and everything we have fought for and hold dear,” Guilfoyle said. “They want to steal your liberty, your freedom.”

Don Jr framed the contest between his 74-year-old father and the 77-year-old Biden, who he inaccurately characterized as a “radical left” Democrat, as a choice between “church, work and school” and “rioting, looting and vandalism.”

The coronavirus pandemic, which has left more than 178,000 people dead in the United States, millions unemployed and dented Mr. Trump’s re-election hopes, was largely ignored although Don Jr claimed there is “light at the end of the tunnel.”

Mr. Trump, who is trailing Biden in the national polls, continued his attack meanwhile on mail-in voting, which is expected to play a larger role than in past elections because of COVID-19.

“For our Country to be sending 80 million UNSOLICITED BALLOTS is very unfair and a roadmap to disaster,” Mr. Trump tweeted. “Fraudulent & missing Ballots like never seen before.”

Opponents say Mr. Trump’s resistance to expanded mail-in voting is an attempt to suppress voter turnout, while setting up an excuse to challenge the result if he loses.

Two of Mr. Trump’s other children, Eric Trump and Tiffany Trump, will also be among the featured speakers on Tuesday along with an anti-abortion activist and an advocate for tighter immigration laws.

Mr. Pompeo praised the president in a tweet ahead of his remarks. “President Trump has ensured the safety of America — and SECURED our many FREEDOMS, which is the cornerstone of this great nation,” he said.

“I look forward to sharing with you how the President has delivered on that mission TONIGHT!” said Mr. Pompeo, whose remarks were taped while he was on an official visit to Israel.

An appearance at a party convention is unusual for a top U.S. diplomat and the Biden campaign accused Mr. Pompeo of “blatant use of his office for overtly political purposes.”

According to Israeli media, Mr. Pompeo may have taped his remarks from the rooftop of the King David Hotel in Jerusalem, providing a backdrop of the Holy City that may appeal to Mr. Trump’s evangelical supporters.

Melania Trump, 50, will speak live from the White House Rose Garden and will be hoping to erase the embarrassment of her 2016 convention speech, when she was accused of lifting passages from the remarks of another first lady — Michelle Obama in 2008.

“She will probably attempt to do what candidates’ wives typically do on these occasions, which is try to show her husband in a warm, human, personal light,” said Katherine Jellison, a history professor at Ohio University.

Although, Jellison added, “Mrs Trump has a greater challenge in presenting the ‘kinder, gentler’ side of her husband than most political spouses have faced.”

Like last week’s Democratic convention, most of the four-day Republican event is being held online with pre-recorded speeches because of the COVID-19 pandemic.

Mr. Trump did visit Charlotte, the North Carolina city where the convention is being held, to make remarks on Monday and he will make a live acceptance speech on Thursday.

As Republicans kicked off their convention, a number of high-profile Republicans threw their support behind Mr. Biden, the moderate long-time senator from Delaware making his third bid for the White House.

“That’s why we need Joe Biden.”

The Hindu Explains | Why are Democrats and Republicans squabbling over nomination to the U.S. Supreme Court?