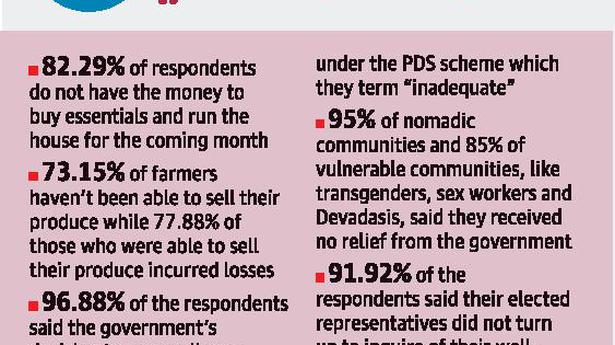 A survey of manual labourers, including those in the agricultural sector, small farmers and marginalised and vulnerable communities in the State by Karnataka Janashakti reveals a bleak picture of how their lives have been impacted by the over-two-month lockdown. It also reveals latent anger against the government and bureaucracy among those surveyed over lack of adequate relief during the lockdown.

One of the major trends is that people do not have money in their hands to make ends meet. An overwhelming majority – 82.29% of the 1387 respondents – said they do not have the money to buy essentials and run the house for the coming month.

As the living conditions of the poor and working class has been precarious, the survey reveals that relief from the government has not reached a majority of the respondents. While 52.34% said they received no help from the government during the lockdown, 44.27% said they got only foodgrains under the PDS scheme, which they termed “inadequate”.

“There is latent anger among the people against the government, as over 90% of the respondents said neither elected representatives had come to inquire of their well-being, nor were the bureaucrats helpful,” said Mallige Sirimane of Karnataka Janashakti.

Around 95% of the nomadic communities and over 85% transgenders, sex workers and Devadasis have reported that no relief has reached him. Further more, 62% of respondents among transgenders, sex workers and Devadasis reported health issues during the lockdown. However, the survey doesn’t reveal what kind of health issues they faced.

A majority of respondents also expressed unhappiness with the government’s decision to re-open liquor shops during the lockdown.

The survey recommends a massive Direct Cash Transfers (DCT) programme, increasing the number of work days in the National Rural Employment Guarantee Scheme (NREGS) and devising Urban Employment Guarantee Scheme, among other measures. It opposes recent legislative interventions to the APMC Act and labour laws. Karnataka Janashakti has also recommended levying of 2% wealth tax on the richest 1% of the country to finance COVID-19 relief efforts.