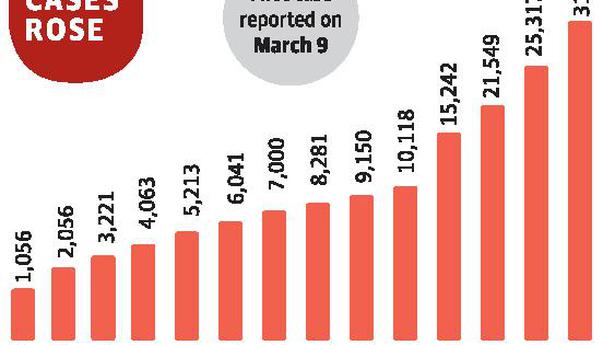 Five days after clocking 20,000 COVID-19 infections, Karnataka breached the 30,000 mark on Thursday and touched 31,105, as the State reported 2,228 new cases and 17 fatalities. The death toll stands at 486. This is apart from four deaths of infected persons owing to non-COVID reasons.

The death toll which stood at 246 on June 30 almost doubled in the last nine days. Karnataka’s case fatality rate (CFR) now stands at 1.49% while in Bengaluru Urban it is 1.28%.

Among the new cases, 1,373 are from Bengaluru Urban, which did not report any death in the last 24 hours. While seven of the deaths are from Dharwad, two each are from Mysuru, Kalaburagi, and Hassan. One death each has been reported from Raichur, Uttara Kannada, Tumakuru, and Davangere.

With Thursday’s numbers, the total tally of positive cases in Bengaluru Urban touched 13,882. The total number of discharges in the State stood at 12,833, with 957 more people, including 606 from Bengaluru Urban, walking out of hospitals on Thursday.

Of the 17,782 active cases, while 457 patients are being treated in the ICUs of various designated hospitals, the condition of the rest is stable.

The number of positive cases in the State has been on a steady rise since mid-June.