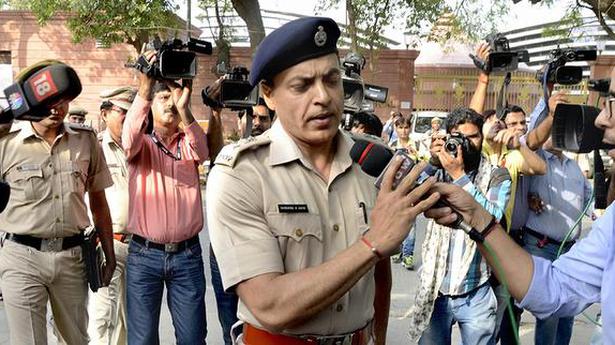 The Delhi High Court on Monday allowed a trial court here to proceed with hearing arguments on framing of charges in the then Chief Secretary assault case in which Chief Minister Arvind Kejriwal and his Deputy Manish Sisodia were made accused.

Justice Vibhu Bakhru allowed an application by then Chief Secretary Anshu Prakash and modified its March 14, 2019 order by which the trial court was directed not to hear arguments on the charges.

Mr. Prakash has also sought a direction for an early hearing of the petition filed before the High Court by Mr. Kejriwal and Mr. Sisodia challenging the trial court’s October 22, 2018 order permitting two other advocates to conduct the prosecution on behalf of the officer of Delhi Police, instead of a regular Public Prosecutor attached to the court concerned.

The High Court, however, noted that the petition is listed for hearing on November 2 and it was not feasible to hear it at an earlier date.

During the hearing, senior advocate Siddharth Luthra, appearing for Mr. Prakash, said in order to save time, he had no objection if the arguments on charges are heard and the case is prosecuted by the regular Public Prosecutor. Senior advocates Dayan Krishnan and N. Hariharan, appearing for Mr. Kejriwal and Mr. Sisodia, also said they do not have any problem on regular prosecutor conducting the case before the trial court.

The criminal case relates to alleged assault on Mr. Prakash during a meeting at Mr. Kejriwal’s official residence on February 19, 2018.