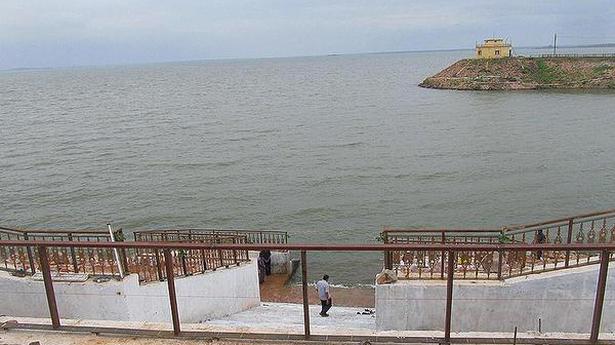 The prospects of timely release of water to the ayacut under several major irrigation projects in the Krishna and Godavari basins in the State have increased with the projects in the upstream of the major river courses getting sizeable flood, particularly in Krishna and its tributaries in Karnataka.

With the instructions from the government, the irrigation authorities are planning to give water to about 40 lakh acres under major projects in the State this season. Last year, release of flood from Jurala to Srisailam commenced towards the end of July and from Srisailam to Nagarjunasagar in the first fortnight of August.

On Thursday evening, the flood into Almatti stood at about 69,000 cusecs with the Central Water Commission (CWC) forecasting further increase in the inflows by Friday morning. Water release from Almatti to Narayanpur dam, also in Karnataka, has already commenced through power generation. e inflows into the two major reservoirs in Karnataka, on which the fortunes of Srisailam and Nagarjunasagar depend to a large extent, have already received about 66 tmc ft of water this water year, since June 1. As on Thursday evening, the flood cushion in the two reservoirs stands at 55 tmc ft against their capacity of 167 tmc ft. According to the irrigation engineers, Jurala project, the gateway of Krishna water into Telugu States, has been getting some inflows for about a week now and the reservoir has already recorded inflows amounting to nearly 4 tmc ft. The authorities have already started releasing water to canals for filling tanks since the storage has reached about 7.8 tmc ft against its capacity of 9.66 tmc ft. Similarly, Srisailam has received about 3 tmc ft and Nagarjunasagar 4 tmc ft of water with the rains in the local catchment areas so far. Flood from Handri into Srisailam reservoir was recorded at over 14,000 cusecs at 7 pm on Thursday. Flood into several projects and barrages based on Krishna’s tributaries such as Ghataprabha, Malaprabha, Tungabhadra and others in Karnataka is also considerable. According to CWC officials, Hidkal dam across Ghatprabha in Belgaum district was getting inflow of nearly 18,000 cusecs, Singatalur barrage across Tungabhadra was getting inflows of about 23,000 cusecs and the inter-State Tungabhadra project in Ballari district was getting about 25,000 cusecs of inflows on Thursday. he Godavari basin, the inflows in Sriramsagar in spite of lifting of the Babli barrage gates were only at about 1,500 cusecs and Kaddam project in Nirmal district and Yellampally barrage in Peddapalli district were getting only nominal inflows. However, carry over storage of water in Sriramsagar and other projects has enabled the engineers to release water to some canal systems already. Inflows into Medigadda barrage from Pranahita too are considerable at around 50,000 cusecs although the pumping back of water in to the upstream barrages of Godavari river – Annaram, Sundilla and Yellampally – is yet to be taken up.