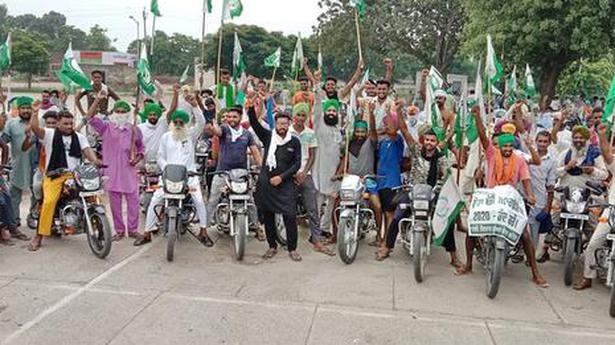 Farmers of as many as 10 outfits on Monday staged a ‘two-wheeler’ protest in Punjab, opposing the Centre’s recently promulgated agriculture-related ordinances and amendment to the Electricity Act.

The protests were carried out under the banner of the All India Kisan Sangharsh Coordination Committee, an umbrella body of over 250 farmer and farmworker organisations, in most of districts of the State.

Farmers were seen shouting slogans against the recently promulgated ordinances by the Centre, which included the Farmers Produce Trade and Commerce (Promotion and Facilitation) Ordinance; the Farmers (Empowerment and Protection) Agreement on Price Assurance and the Farm Services Ordinance and the Essential Commodities (Amendment) Ordinance. They demanded an immediate withdrawal of these ordinances, besides revocation of the amendment to the Electricity Act.

Darshan Pal, convener, AIKSCC, Punjab chapter, said the protests were aimed at highlighting the plight of farmers. “We staged demonstrations outside the residences of MLAs, Ministers and conveyed our demands. We have already written a letter to Prime Minister Narendra Modi. If immediate steps to address our problems are not taken, we will intensify our agitation,” he said.

Separately, Union Food Processing Industries Minister Harsimrat Kaur Badal has urged Railway Minister Piyush Goyal to start a dedicated ‘kisan rail’ with refrigerated bogies from Abohar in Punjab to Bengaluru in Karnataka and to Kolkata in West Bengal during the harvest season of ‘kinnow’ fruit crop between December and March to benefit farmers of Punjab, Rajasthan and Haryana.

Ms. Badal, in her letter, said Abohar functioned as the focal market for aggregation of ‘kinnow’ and handled 25 lakh tonnes of produce every year.

“The kisan rail originating from Abohar could take ‘kinnow’ to the southern and eastern States where there was a big market for the fruit,” she said.

Ms. Badal added that the biggest market for the fruit was in Bengaluru and Kolkata, even as a significant quantity was exported to Bangladesh.

She said she had been assured by the farmers and traders of the region that the ‘kisan rail’ would be utilised to full capacity.