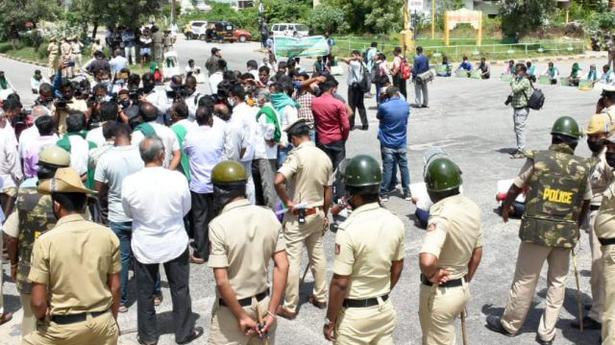 Traffic was disrupted on the busy Mysuru-Bengaluru highway for some time on Friday as activists of various organisations held protests against the farm laws brought in by the BJP government at the Centre.

Will the farm bills give farmers a choice? | The Hindu Parley podcast

More than 100 people were taken into custody when they gathered at Columbia Asia junction on the Mysuru-Bengaluru highway in Mysuru to protest against the farm laws. Similar road blockades were held opposite the bus stand in Srirangapatna and Koppa circle in Mandya.

However, police said they cleared the protesters from the road 15 minutes to facilitate traffic movement. “Movement of traffic was disrupted for about 10 to 15 minutes. Free flow of traffic has been ensured on the highway”, said an official from Mandya district police.

In Mysuru, the activists belonging to various progressive organisations like DSS and Swaraj India had mobilised themselves under the aegis of “Aikya Horata” to protest against the farm laws. Activists like Hoskote Basavaraj, Abhiruchi Ganesh, Ugra Narasimhe Gowda, besides P Mallesh, participated in the protest.

The protesters were taken away in two buses to a nearby entertainment park and released later. Similar protests were held across different taluks of Mysuru district, said Mr Ugra Narasimhe Gowda.

The Mandya district police said protests were also held at Sanjay circle in Mandya town, besides other places in Malavalli and Nagamangala in the district. But, these protests did not lead to blockade of traffic on the highway, the police added.

Opposition role is to play politics and not to remain silent, says Stalin