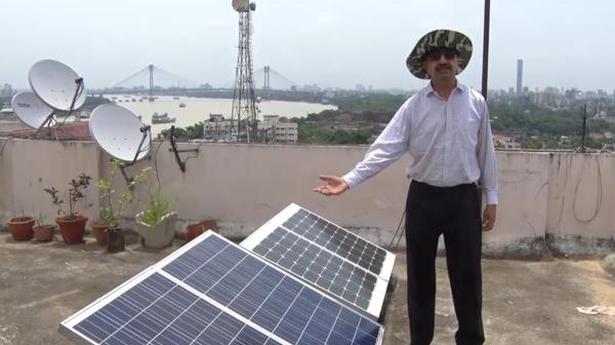 At a time when Indian Railways is pushing for increasing the use of renewable energy, a Railway officer in Kolkata has tried to bring in behavioural changes in household electricity consumption by setting up a renewable energy park at the Garden Reach area of the city.

Sanjay Singh Gehlot, Additional General Manager, Eastern Railway, is often referred to as “Green Man of Garden Reach” for his mission to use renewable energy for meeting the daily power consumption of households in the railway officers’ complex located in the southwestern part of the city.

“I am able to generate 70% of my household power using a combination of power sources like solar cooker, solar water and photo voltaic cell and windmill. The initiative has generated a lot of awareness, with the entire roof of the hospital building and officer rest house having been covered with solar power panels,” Mr. Gelhot told The Hindu.

The renewable energy park developed on the roof of building no. 19 of South Eastern Railway, North Colony, Garden Reach has a host of renewable equipment from butterfly solar cooker to parabolic solar cooker and solar water heater to solar photovoltaic cells. The senior railway official has also installed windmills that run for seven to eight months of the year from April to October.

What makes Mr. Gehlot’s initiative unique is that it comes without any institutional support and is a result of his personal efforts. “The initiative proves that it is very much possible to use renewable energy for household power requirements and reduce carbon footprints,” he added.

Mr. Gehlot has achieved this feat through five years of trial and error with different kinds of equipment, and the renewable energy park has received praise from the Ministry of Railways.

Experts working in the area of renewable energy are of the opinion that much attention is given to organizational initiatives for switching from conventional sources to renewable sources but the difference that people can make by adapting to clean energy is overlooked.

The initiative comes at a time when the Railways is accelerating its efforts to install and use renewable energy as part of its objective to reduce carbon footprint. Eastern Railway (ER) has also plans to increase the solar energy to 300 million watts by the end of 2020.

In Pictures | Low-key but topical, Durga Puja amid the COVID-19 pandemic