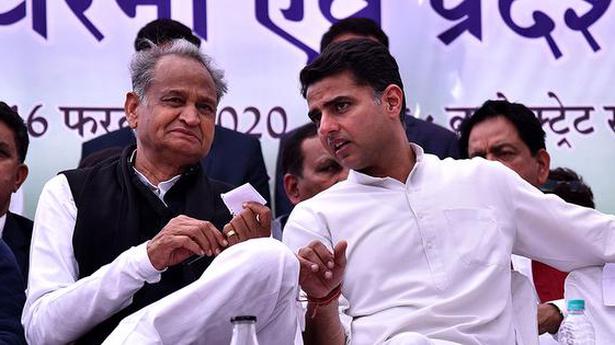 
Rajasthan Chief Minister Ashok Gehlot and the Congress leader Sachin Pilot met on Thursday, after a month-long political turmoil at the former’s residence in Jaipur. They will be attending the Congress Legislature Party meeting, a day before the State Assembly begins.

“We have to put all our energies in this fight to save democracy with the spirit of forgive and forget and move forward,” Mr. Gehlot tweeted.

Ahead of a Congress Legislature Party (CLP) meeting in Jaipur, Congress has revoked the suspension of MLAs Bhanwarlal Sharma and Vishvendra Singh who were supporting ousted Deputy Chief Minister Sachin Pilot.

They were suspended on July 17 after some audio clips surfaced pertaining to an alleged conspiracy to topple the Ashok Gehlot government in Rajasthan. Vishvendra Singh was also sacked as the Tourism Minister.

Party sources said the meeting would be attended by former deputy chief minister Sachin Pilot and other dissident MLAs.

The decision to revoke the suspension of the two MLAs follows a patch-up between the Ashok Gehlot and his sacked deputy Sachin Pilot after the intervention of the party’s top leadership in Delhi.

Eighteen MLAs had backed Pilot in the rebellion, demanding a change of leadership in Rajasthan.