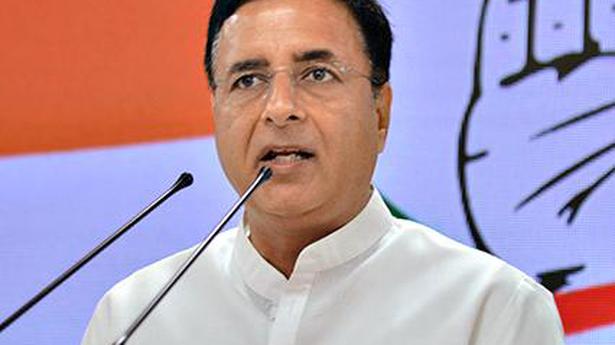 Senior Congress leader Randeep Surjewala on July 15 asked dissident leader Sachin Pilot to stop accepting a BJP government’s hospitality if he does not wish to join that party and “return home” in Jaipur to discuss grievances.

Also read:  Sachin Pilot expected to spell out his future plans on July 15

The reference was to reports that the MLAs close to the rebel leaders are holed up in hotels in Gurgaon of Haryana, where the BJP is in power.

He also repeated the party’s appeal to Mr. Pilot, asking him to come back to the family.

“I have seen Pilot’s statement in the media that he will not join the BJP. If you do not want to go to the BJP, stop accepting the hospitality of the BJP immediately,” he told reporters outside a Jaipur hotel where party MLAs backing Chief Minister Ashok Gehlot are lodged since July 13.

He told reporters that Mr. Pilot should free the Congress MLAs who are staying in two luxury hotels and under the security of the Haryana Police.

Mr. Surjewala said the party leadership spoke to Mr. Pilot several times but he and the other Congress MLAs did not come to attend the Congress Legislature Party meetings.

“Our young colleague Sachin Pilot was requested several times by the party leadership with an open heart to come and speak on the party forum if he has differences with the Chief Minister or any other leader,” the Congress chief spokesperson said.

He said Mr. Pilot should “return home in Jaipur” and should speak on the party forum.

“I would also suggest other Congress MLAs that they should not avoid returning. Come, sit and talk in the family. This will be the proof of your true allegiance and commitment to the party,” Mr. Surjewala said.

Mr. Surjewala said the Congress gave Sachin Pilot many post at a young age, which probably no other leader in any party got, be it the Congress or the BJP.

The party had to announce action against him with a heavy heart, he said.

Mr. Pilot was sacked on July 14 as Rajasthan’s Deputy Chief Minister and the president of the State unit of the party after he did not attend the Congress Legislature Party meetings.

Two other Ministers — Vishvendra Singh and Ramesh Meena — were also removed from the State Cabinet.

They are accused of involvement in the BJP’s conspiracy to topple the Ashok Gehlot-led Rajasthan government.