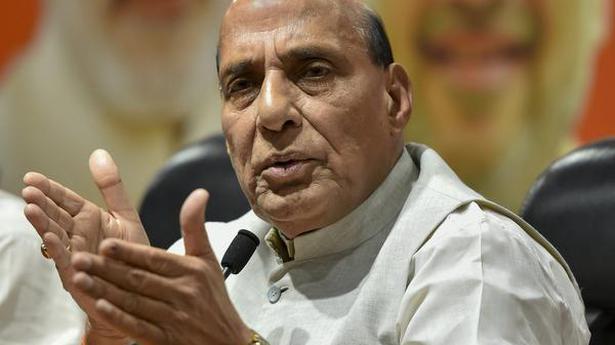 As tensions continue, Defence Minister Rajnath Singh on Monday reviewed the situation along the China border with the Chief of the Defence Staff (CDS) and the three Service chiefs.

The meeting comes two days after the talks between senior military commanders to defuse the month-long stand-off.

However, official sources said the Monday meeting was routine. Mr. Singh had been holding regular consultations with CDS Gen Bipin Rawat and Army Chief Gen Manoj Naravane on the border situation and this was also part of the routine review.

While there is still no clarity on the next round of senior level talks, the sources said the dialogue between local commanders on the ground would continue. At the Saturday talks, which was the highest military dialogue so far to address the issue, India firmly conveyed that it wants the restoration of status quo ante of April before the stand-off began and China pull back back troops close to the LAC. More meetings are scheduled to be held both, military and diplomatic, to end the impasse.

China’s Ministry of Foreign Affairs (MFA) said the situation overall along the border was “stable and controllable” and the two sides were ready to engage in consultation to “properly solve the relevant issues.”

Responding to questions on the military level talks, MFA spokesperson Hua Chunying maintained a similar line as that of the Ministry of External Affairs. He stated that recently diplomatic and military channels of the two sides had maintained close communications on the border situation. “One consensus is that the two sides need to implement the two leaders’ consensus and make sure that differences do not escalate into disputes.” The two sides would work to maintain peace and tranquility along the border and create a good atmosphere, he noted.

What is the Doklam issue all about? | A timeline of the Doklam stand-off

Chinese state Media, Global Times, in a commentary on Monday quoting experts, said the current stand-off would not become another Doklam crisis as both sides have gained a great deal of experience from the 2017 stand-off and since then “all kinds of bilateral mechanisms including on military, diplomatic and local issues have been established, which has eliminated the possibility of an incident escalating into a crisis.” However, it said the ongoing stand-off was not likely to end immediately, as concrete issues must still be resolved.

Apple to launch first online store in India next week –...

Apple to launch first online store in India next week –...