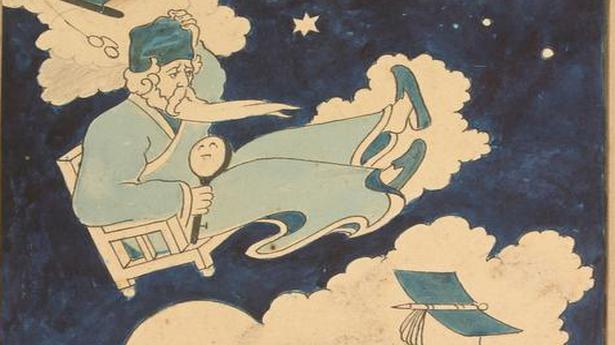 A rare photograph of Rabindranath Tagore signed by him showing the poet with Mahatma Gandhi and Kasturba Gandhi in Santiniketan in April 1940; Tagore in the clouds during his first flight from 1921, painted by Gaganendranath Tagore; and the pages of a handwritten manuscript titled Geetāshtak by the poet in Nuremberg and Munich on 18-19 September, 1926 — these exhibits are part of an online exhibition organised by Victoria Memorial Hall (VMH) and Ministry of Culture on the occasion of India’s 74th Independence Day, through Google Arts & Culture.

The organisers said that the virtual exhibition not only pays homage to Rabindranath Tagore, but also offers an opportunity to learn more about the Nobel laureate’s contribution to India’s freedom movement.

A letter by Tagore to Dilip Kumar Roy – written in verse in a humorous style on 18 January 1928 – saying how much the poet misses his company.

Some of the noteworthy moments included in the exhibition are references to how Tagore opposed Lord Curzon’s Partition of Bengal in 1905, and used his gift of the pen to write songs to unite the Bengali population, including ‘Banglar Mati Banglar Jol’ (‘Soil of Bengal, Water of Bengal’) and ‘O amar desher mati tomar paaye thekai matha’ (‘O my motherland! I bow to thee’). The exhibition also points out how Tagore gave up the knighthood when he was honoured by the British, in protest against the Jallianwala Bagh massacre in 1919. A selection of 16 images from the collection of the VMH in the virtual exhibition can be viewed at: https://artsandculture.google.com/exhibit/rabindranath-tagore/iALivpnofn5SKQ

“Since the museum is still shut, we are trying to enhance our digital presence on various platforms. This has led us to use the innovative but user-friendly technology offered by the Google Arts & Culture platform to curate thematic exhibitions that offer online visitors a novel experience,” Jayanta Sengupta, Secretary and Curator of VMH, Kolkata, said. Mr. Sengupta expressed the hope that the exhibition will help visitors engage with Tagore in hitherto unexplored ways and appreciate his creative genius.

This is the second exhibition to be organised by the VMH after the COVID-19 pandemic forced the galleries of the iconic structure to shut down. Earlier this month, the museum organised a virtual exhibition ‘An Inheritance of Imaginations’ showcasing the paintings of Abanindranath Tagore, Gaganendranath Tagore and Sunayani Devi.

The VMH Curator said there was little doubt that every museum would have to expand its digital footprints in the present circumstances, but also added that institutions will have to be cautious about the digital divide in India.