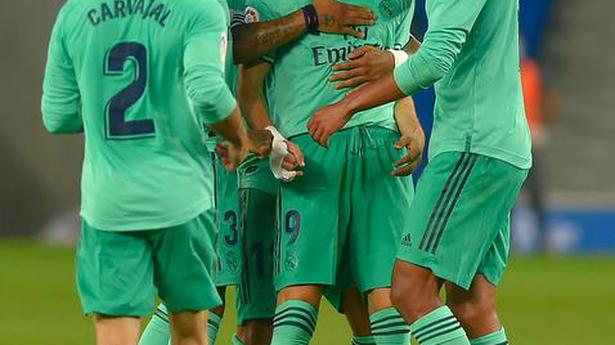 Real Madrid knocked Barcelona off the top of LaLiga by beating Real Sociedad 2-1 on Sunday as Sergio Ramos rolled in another penalty before being forced off due to injury.

Karim Benzema continued his excellent form by adding a second at Anoeta and while Mikel Merino gave Sociedad hope with seven minutes left, Madrid held on to go above Barca on head-to-head as both have 65 points.

Madrid also benefited from two tight decisions after Adnan Januzaj drove in an equaliser for Sociedad, only to have it ruled out before Benzema doubled the lead and was adjudged not to have controlled with his arm.

Liverpool’s march towards the Premier League title was delayed as the leader returned to action with a goalless draw against Everton in the ‘Merseyside derby’, while Chelsea fought back for a 2-1 win at Aston Villa.

Everton came closest to breaking the deadlock as Tom Davies struck the post and Alisson Becker saved from Dominic Calvert-Lewin to deny the former a first derby win in 10 years.

Incidentally, the match was the most-watched Premier League game ever on British television with an average of five million people across Sky’s channels watching the derby.

Liverpool, which looked rusty in its first game in 106 days following the lockdown, has won just two of its last seven games in all competitions.

Frank Lampard believes Christian Pulisic can be Chelsea’s trump card in the race to qualify for the Champions League after his decisive cameo at Villa Park.

Lampard’s side were rocked when Kortney Hause put Villa ahead against the run of play in the first half. But Pulisic came off the bench after the break to equalise before Olivier Giroud bagged his fourth club goal of the season.

Chelsea’s quick-fire blitz moved the fourth-placed west Londoners five points clear of Manchester United in fifth as it fights to qualify for next season’s Champions League.

In Serie A, Atalanta overpowered Sassuolo 4-1, while Inter Milan went past Sampdoria 2-1.