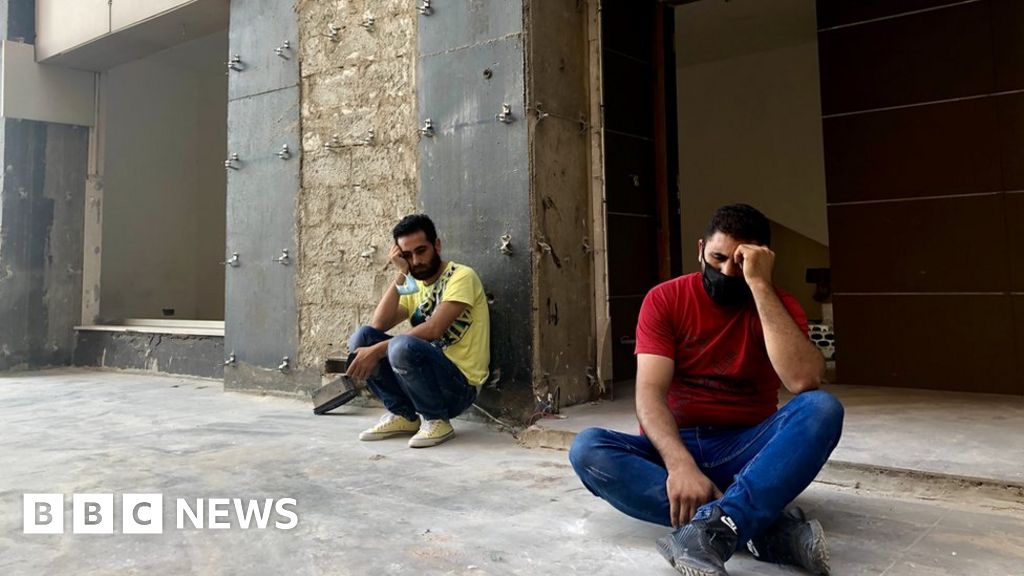 There’s not a lot to pick up. But Syrian refugees don’t have very much.

Mahmud and his brother-in-law, Fawaz, are salvaging what they can from what used to be their father’s home, a modest flat tucked away behind one of Beirut’s seafront tower blocks.

They stumble over rubble and twisted metal to reach what used to be the living room. A fridge leans on its side, its door hanging open. A bird cage lies crushed on the floor, a lifeless canary nearby.

Small showers of shattered glass still occasionally sprinkle down from the floors above.

The Côte Building is still standing, but it’s a wreck. It’ll be a long time before new tenants are found for its gutted luxury apartments.

If anyone can claim to have been living closest to the epicentre of the explosion in Beirut on 4 August, it was the people living out of sight at the back of the ground floor: the Kenno family, refugees from Syria’s Aleppo province.

From the gutted lobby of the Côte, the view gives out over the busy coast road to the port beyond. A cloud of yellow dust still swirls over the shattered grain silos next to where 2,750 tonnes of ammonium nitrate exploded, sending a devastating shock wave across the city.

That evening, Mahmud’s father Ali was sitting next to the building where he worked as concierge, watching the fire raging at the port. His wife Fatmah told him to come inside, but he didn’t think there was anything to worry about.

The explosion brought heavy stone cladding raining down from above, wounding them both, as well as their 11-year old daughter Huda.

When Mahmud heard the blast, he raced to the building from the nearby suburb of Daoura.

“I thought I would never see my family alive,” he says. “On the way from Daoura, I saw terrible scenes. I saw people in their cars, dead. I thought that would be my family’s fate.”

Ali, Fatmah and Huda all suffered terrible injuries but survived.

However, Huda’s 16-year-old sister, Sidra, died in the rubble.

Mahmud and Fawaz wrap small pieces of bloodied stone in a sheet, adding them to their meagre collection of belongings.

They take them up into the nearby hills, where the family has found temporary accommodation and a place to nurse their many wounds.

More on the explosion in Beirut

They’re exhausted and broken, grieving for Sidra. Mahmud has already buried her, far away in the Bekaa Valley, in a plot reserved for Syrian refugees.

Huda and her mother lie still on thin mattresses, immobilised by neck and back braces.

Ali has an ugly scar on the back of his head. He suffered a fractured skull. He’s still blind in one eye.

All three are in pain and Mahmud feels they’re not getting adequate care.

But with Beirut’s hospitals overwhelmed, the family must look after themselves. They have no savings and now no work either. They’re spending what little they have on medicine and accommodation.

Ali doubts he’ll ever make it back to his job at the Côte.

You don’t hear Beirutis talking much about it, but Syrians refugees were hugely caught up in the explosion.

The UN says at least 13 refugees died and that 57 remain unaccounted for. The real number may never be known as not all Syrian refugees are registered or carry papers.

Many lived in poor neighbourhoods adjacent to the port, while some worked on the docks.

With homes damaged and breadwinners gone, life for an estimated 1.5 million Syrian refugees in Lebanon has just become a little harder.

Mahmud was living and working in Lebanon long before the rest of his family fled Syria. He arrived at the age of 13 and even helped to build the tower block where his family ended up living.

He’s always looked after himself. He can’t stand this new feeling of helplessness.

“I hate it when someone calls me a refugee,” he says.

“I have my dignity. I’ll never put out my hand and ask for help. But now I really need it. My situation is really, really bad.”

After two weeks of relentless effort – locating his hospitalised relatives, burying his sister, providing for the extended family – he’s bitter.

“All I’m thinking about is how to get out of here,” he says.

“I hate this country. My sister died here.”