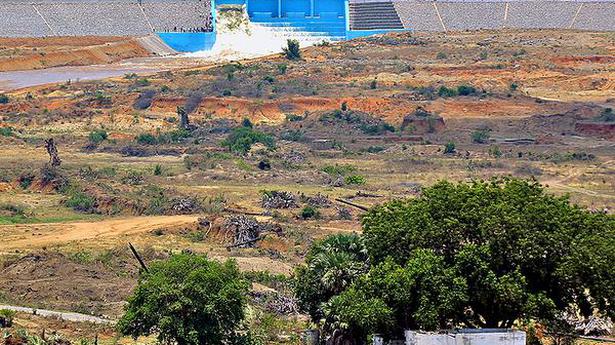 Renuka Yellama temple in this village is getting submerged in Ranganaiksagar with the release of Godavari water into the reservoir.

In the midst of the yet-to-be-filled reservoir is a huge tree spreading its canopy across, standing as a witness to the transforming history. Under the tree is the Renuka Yellamma temple built several decades back. An RCC roof nearby provides shelter to devotees visiting the temple. Inside is a 10-foot idol of Goddess Renuka Yellama in sitting posture, draped in a red sari and adorned with bangles on the right hand, while the left hand holds a bunch of neem leaves. An elderly lady has been offering ‘Naivedyam’ to the Goddess.

Even a few days before Godavari water from Kaleshwaram was released into the reservoir, people offered prayers at the temple. According to sources, officials made several attempts to relocate the temple by dismantling it, but could not succeed. “We sent heavy equipment several times to demolish the temple,but for one reason or the other we came across hurdles. At one instance several snakes entered the heavy machinery. Hence we decided not to demolish the temple. The structure will emerge from the water whenever the reservoir goes dry or water level comes down. A new temple is being built where another idol will be consecrated for worshipping,” an official told The Hindu.