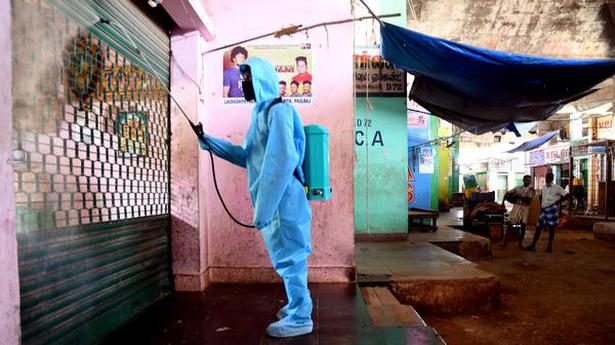 With the Koyambedu wholesale market complex remaining closed for almost a month now after it became a COVID-19 hotspot, various traders’ associations have represented to the Chief Minister and the Market Management Committee seeking the reopening of the wholesale hub, with safety regulations.

Though wholesalers have been allotted space at the Thirumazhisai market, traders noted that sales were dull and there were not many takers for the produce. On some days, unsold produce of up to 400 tonnes that arrive at the market are being wasted due to lack of storage space. On an average, the marker receives 5,000-6,000 tonnes of vegetables daily, traders said.

D. Rajasekaran, president, Federation of All Associations of KWMC Periyar Market, said most of the vegetables are being sold at a rate within Rs.10 per kg now as several retailers avoid the market due to distance and other restrictions.

Many traders are forced to sell stock at a lower rate to prevent wastage. Farmers are also badly hit as they get lower prices that hardly cover transportation charges for their produce, they said.

Wholesale traders noted that several retailers and semi-retailers in Koyambedu were unable to continue trade due to the closure of the Koyambedu market. This has also affected the supply chain.

Meanwhile, the Market Management Committee had communicated to traders that stern action would be taken against those who were found to be sourcing excess produce and dumping vegetables. However, traders noted that several farmers directly brought produce to the market and traders have reduced orders.

S. Chandran, a wholesale trader, said, “Only 50%-60% of the business is being carried out. The absence of small markets in the city is reflected in the wholesale trade. We get only 25% of retailers who are regular to the Koyambedu market. A sack of 80 kg of cabbage was sold for Rs. 300 on Thursday to prevent wastage. “Consumers are also affected as vegetables are priced high at the retail markets in the city,” he added.

Members of the Koyambedu Vegetables, Fruits and Flowers Merchants Welfare Association have also written to the Chief Minister and Deputy Chief Minister seeking the reopening of the Koyambedu market to protect the livelihoods of traders and labourers. They suggested that the market could be operated on a rotation basis with half the shops open each day. The market can be reopened with the precautionary measures and norms being followed in Thirumazhisai, they added.

Two footballers test positive for COVID-19 ahead of I-League Qualifiers |...