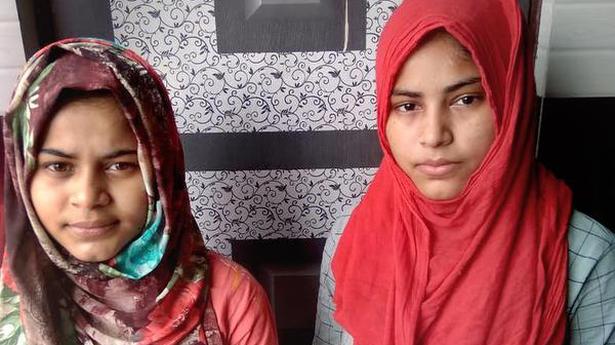 Two sisters — Muskan Ansari (17) and Sonam Ansari (18) — residents of riot-affected Shiv Vihar were first surprised that their results were announced on Monday and then disappointed that they were among the 400 students whose results were not declared.

Class 12 CBSE results were declared early afternoon. However, when the girls tried to log in to the website on the phone, they couldn’t. What followed were at least three rounds to the local cyber café till they finally saw their results around 5.30 p.m. The website was not accessible for hours, they complained.

Both of their results read “RL”. Below, the full form was given as ‘Result Later’.

Clueless, the sisters called their school teacher. “I asked her [teacher] what this means. She said she had no idea and asked us to visit the school and enquire,” said Sonam, student of Veer Roshan Singh Government Sarvodaya School in Gokulpuri where Muskan goes along with her.

The sisters said that the communal riots had impacted their lives in a way that they’re finding it tough to move on. “Now, we don’t know what to do next. When will our results be declared, how will be proceed with our college applications. First, we couldn’t take the exams because of the riots and now, this uncertainty,” said a worried Sonam.

The first and the only examination they took was on February 24 — the day is still vivid in their memories. They couldn’t take any other exams owing to the tense situation.

“The situation was still better when we were going to our centre in Ghonda in the morning. But when we stepped out after the exam, people were throwing stones everywhere. Our grandmother navigated our way from narrow lanes so we could reach home safely,” recalled Muskan.

The entire day, the family was holed up in the house and heard gunshots and people shouting.

Around 4.30 a.m. the next day, the family shifted to a relief camp in Chaman Park. “It was pitch dark and all we could see was fire. Everything was on fire,” she said. The family subsequently shifted to the Idgah relief camp where they stayed till the tents were emptied out due to the outbreak of COVID-19. A few days later, they stayed in their grandfather’s friend’s house and finally moved back to their own residence in Shiv Vihar.

“We just did not have the mental state to take exams at that time. We didn’t have our admit cards, our books to study. Nothing. At the time, all we cared about was to be safe. It was a scary time and we wondered if it was ever going to end,” said Sonam.

A few days later, when things were returning to normal, the girls called their teacher to enquire as to how and when would their exams be conducted again. They were informed that the exams had been cancelled and that they would be assessed based on their internal exams and practical exams.

The girls now wait for the results to be able to pursue their graduation courses.

Muskan is sure she wants to become a lawyer — a profession she had decided to take up a few years ago, but her decision only strengthened after the riots.

“I wanted to become a lawyer because they are knowledgeable, but after riots, I only realised how important it is to know our rights and to be able to exercise them. We should know what our government is doing for us,” said the 17-year-old.

However, she is yet to figure out which college to go to and how to proceed with the applications.

The sisters, along with their younger brothers Sahil (16) and Adi (15), live with their grandparents after both their parents left them when they were little.

The father, they say, has been missing for the last 11 years and the mother left them a year after the father left.

Watch | Why are the agriculture bills being opposed?