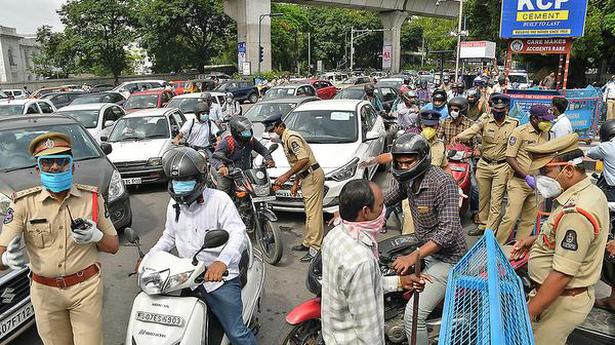 All arterial roads, and even those in small neighbourhoods leading to the secretariat complex were barricaded amid an increased constabulary, as the demolition of its buildings was in progress, leaving motorists confused.

Barricades were set up at Khairtabad flyover, and the road to Khairtabad Market near the railway gate with police manning road blocks. On the other side, the road opposite Saidanima’s tomb, near the Buddha Bhavan, leading to the Necklace road was barricaded. Furthermore, the Lakdikapul main road leading to Telephone Bhavan was blocked. The Telugu Talli flyover was barricaded on both ends.

Traffic moving from the Buddha Bhavan towards Tank Bund was diverted due to road block being put up near the Marriott Hotel. Commuters were forced to move towards Gandhi Nagar or Kavadiguda. But their woes did not end there. As vehicles moved towards Dharna Chowk or Lower Tank Bund, barricades greeted them again. The area near Dharna Chowk was blocked by police vehicles and concertina wire. Commuters were forced to travel towards Domalguda or Himayatnagar from other roads.

The Liberty Crossroads too were blocked as was the approach road Hill Fort Road. Further, the road was barricaded just a few metres short of BSNL Bhavan. “I set up shop here a little before 9.30 in the morning. The barricades were here before I arrived,” said a local businessman who operates his business near Liberty Crossroads.

For many hours, the road leading to the Lok Ayukta office remained barricaded with the police refusing to allow vehicular movement. Several commuters tried to convince the police to allow them, but the police declined. A senior citizen riding a bicycle was spoken to rudely, but later allowed.

Traffic snarl was witnessed at Basheer Bagh, Lakdikapul, and Domalguda, among other places. Several commuters took to social media to express their outrage at not being informed of traffic diversions. “Absolutely irresponsible & unacceptable behavior being shown by our state govt during such time of pandemic. All the roads in and around Khairatabad (leading to Secretariat) have been either blocked or closed. There was a huge traffic jam which led to chaos @KTRTRS @trspartyonline,” tweeted Mohammed Athar Khan.