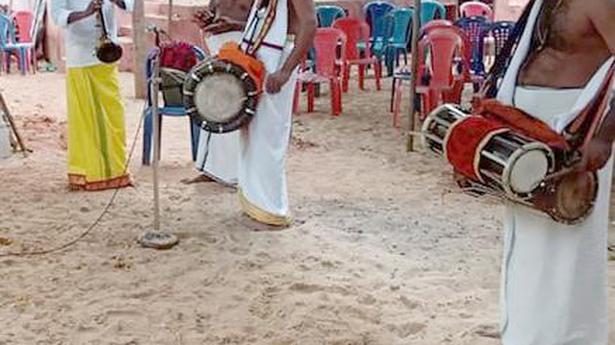 C. Gopalakrishnan, an artiste playing the ‘pambai’ — a folk percussion instrument — was left without any source of livelihood in the wake of the COVID-19 lockdown. He now works as a daily wage labourer at a brick kiln and tile manufacturing unit in Panakudi, Tirunelveli district.

“I know I cannot continue in this job after a week. I am not able to tolerate the heat of the oven and have burnt my fingers and palms while removing the tiles. For a daily wage of ₹340, I work from 8.30 a.m. to 6 p.m. I am not cut out for the job, but I do not know how to eke out a livelihood,” said Mr. Gopalakrishnan, one of the many folk artistes whose earnings have dried up due to the lockdown.

‘Thavil’ player Murugan, who went with Mr. Gopalakrishnan, left the work place before afternoon. “Since childhood, we have been trained only in playing musical instruments, and we cannot do any other work. We can play the instruments for hours together,” said Mr. Murugan, who is part of a naiyandi melam group.

March, April, May and two weeks of June — corresponding with the Tamil months of Panguni, Chithirai and Vaikasi — are busy months for folk artistes in the southern districts. Festivals — Kodai — in the temple of folk deities are held during these months. Artistes performing naiyandi melam, kaniyan koothu, thappu, karagam and villupattu normally have a tight schedule.

“All the festivals have been cancelled. We can think of earning a decent income only next year. Till now, I have been able to subsist on my savings and I may be forced to do other work for a livelihood,” said nagawaram player Panakudi Siva, who leads a naiyandi melam troupe.

Many artistes have taken up menial jobs such as construction work. Cancellation of marriages or marriages held in the presence of very few relatives have also robbed naiyandi melam players, who can also perform classical songs, of income.

“Since I know driving, I approached some people to work as a driver. But I have not been able to find a job so far. I plan to sell garments, but mobilising money is a problem. I fixed my daughter’s marriage in March, but could conduct it only in June,” said V. Muthamperumal, well-known annavi of a kaniyaan koothu troupe.

Organisations like Parivadhini and singer T.M. Krishna have distributed assistance to folk artistes.