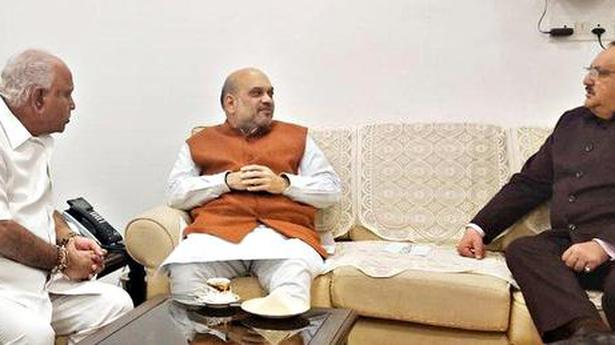 In a major snub to its State core committee, the BJP high command has rejected the three names recommended by it for issuing tickets to contest the Rajya Sabha polls scheduled on June 19.

Instead, the party high command has chosen two lesser known, but old-time party workers as its candidates: the party’s organisational in-charge leaders for Belagavi and Ballari zones, Eranna Kadadi and Ashok Gasthi respectively.

Mr. Kadadi, who has been a party worker for over three decades, served as president of Belagavi Zilla Panchayat. He belongs to the dominant Panchamashali Lingayat community.

Mr. Gasthi has served as chairman of Karnataka Backward Classes Commission. He belongs to the backward Savitha Samaja community.

While the BJP can win two seats comfortably with its present numerical strength in the Legislative Assembly, the party State core committee had recommended three names and had left it to the party high command to choose from among them.

The names recommended were educationist Prabhakar Kore, who had sought renomination; hotelier Prakash Shetty; and Ramesh Katti, brother of disgruntled leader Umesh Katti, who is upset over not getting a ministerial berth.

This was being seen in the State BJP circles as a clever strategy by the core committee, especially Chief Minister B. S. Yediyurappa, as the onus of placing the Katti brothers would be on the party high command.

However, the BJP Central Election Committee took everyone by surprise and chose its own candidates.

While the prominent leaders of the party, especially those belonging to the Yediyurappa camp, have been rattled by the choice, the party cadre is happy. “We are very happy. For the first time, ordinary party workers have been chosen as candidates for the Rajya Sabha,” a party functionary said.

This is also being seen as a clear and stern message to Mr. Yediyurappa as the high command has rejected the candidature of both Mr. Kore and Mr. Shetty who were said to be very close to him.

The timing of the snubbing too has gained importance as it has come at a crucial juncture when some of the party MLAs from northern Karnataka, especially those from the Lingayat community from which Mr. Yediyurappa hails, have raised a banner of revolt against his leadership by holding dinner meetings. Interestingly, both the candidates for the Rajya Sabha hail from north Karnataka.

The decision by the party high command to field only two candidates is likely to result in election of all the four candidates unopposed without any need for polls if no other candidate files nominations.

JD(S) national president H.D. Deve Gowda and veteran Congress leader Mallikarjun Kharge are the candidates from other parties who are set to enter the fray.