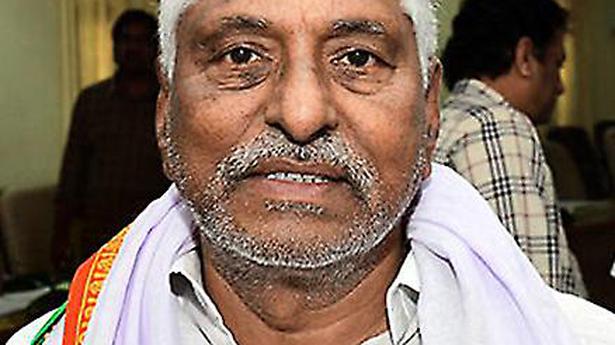 Congress MLC T. Jeevan Reddy accused the government of misleading people about release of Rythu Bandhu assistance and asking them to go for regulated farming without assuring the farmers of remunerative and minimum support price.

In a letter to Chief Minister K. Chandrashekar Rao, he said Rythu Bandhu was released in Yasangi for holdings with less than five acres and now farmers are being threatened of no such assistance if they don’t follow regulated farming as directed by the government. On the other hand lakhs of farmers are yet to receive passbooks, thus being denied of Rythu Bandhu support.

“It is unfortunate that the Chief Minister himself is threatening the farmers after promising Rythu Bandhu for every farmer during elections,” he said adding that nowhere in the country does such forced farming exists.

Mr. Reddy claimed that farmers were forced to underweigh 5 to 10 kgs per quintal to the millers during the paddy procurement. He said if farmers are forced to go for fine variety with lesser yield the government should announce minimum support price in advance.

The Congress leader also alleged that the government failed to utilise the subsidy given by the Central government for promoting horticulture and drip irrigation as State’s share was not released. There seems to be a concerted effort to destroy the horticulture sector with outsourcing employees, he alleged.

Accusing the government of going back on its farm loan waiver promise, he said even after two years the process of waiving off just ₹ 25,000 has started. Previous governments used to bear 4% interest rate on farm loans and Central government bearing the remaining 3% to give relief to farmers on the loans. However, that practice has been stopped forcing the farmers themselves to pay the interest, he said.

Formula One: Biggest coronavirus spike in F1 ahead of Russian...

CAG slams government’s strategic sale of one PSU to another –...