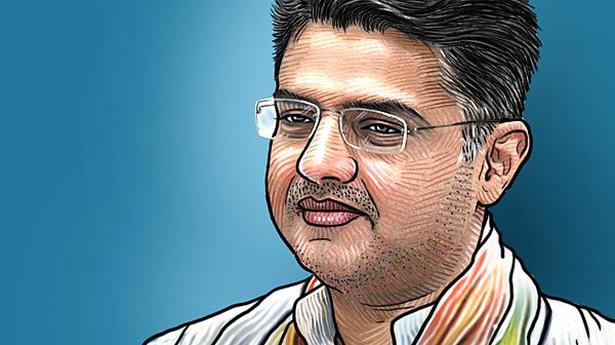 A member of the Lok Sabha at 27, a Union Minister at 32, Congress State chief at 37 and a Deputy Chief Minister of a big State like Rajasthan at 41 — Sachin Pilot’s rise in Indian politics has few parallels. Once feted as the future of the Congress party, Mr. Pilot finds himself in a corner — partly painted in by himself, partly pushed into it by his ruthless rival and Chief Minister Ashok Gehlot, the magician-turned party patriarch, who is never short of a few tricks up his sleeve. At 43, Mr. Pilot is at a crossroads, with precarious options — surrender to Mr. Gehlot or lend his clout to the BJP’s machinations. A more honourable path of making a regional outfit is arduous even for the battle-hardened. Mr. Pilot was born into comfort.

Mr. Pilot inherited a ballast of social capital from his late father, Rajesh Pilot who made it all by himself. Rajesh Pilot was born Rajeshwar Bidhuri Prasad Singh in a village in Ghaziabad in the outskirts of Delhi. The Gujjars, his community, traditionally are cattle herders. He moved with an uncle to Delhi, lived in the outhouse of a Lutyen’s bungalow and sold milk in the neighbourhood, according to the legend. Tenacious, ambitious and zestful, Rajesh Pilot had set his eyes high. He joined the Indian Air Force. A war veteran and a Squadron Leader by 1979, he met Indira Gandhi and sought an entry in politics. Shearing his old surname and adding ‘Pilot’, he entered politics as a Lok Sabha MP from Bharatpur in Rajasthan in 1980. He would soon endear himself to Rajiv Gandhi, and his political career soared.

For the outside world, Sachin Pilot and Rahul Gandhi are children of privilege, but the bonding they would soon develop was equally of tragedy — of losing their fathers at a young age. Rajiv Gandhi was assassinated in 1991 when Rahul was 21; Rajesh Pilot died in a road accident in 2000, when Sachin was 23. In 2004, both entered the Lok Sabha as first time MPs. They often sat together, and spoke — perhaps, about taking the party from the clutches of the old guard. In 2009, Mr. Pilot got a berth in the Union Ministry. The camaraderie between him and the Gandhi siblings was soon talked about in Delhi. He had also married by then. Sarah Abdullah, daughter of Farooq Abdullah and Mr. Pilot had met as children.

His father had bequeathed his style, smile and ambition to Mr. Pilot as it would turn out. His education at Delhi’s St. Stephen’s College and Wharton Business School did not disconnect him from the sense of grassroots. He wanted to be an IAF pilot, but weak eyesight scuttled the plan. He had a brief stint at the BBC in Delhi and worked for General Motors in the U.S. for two years. Among all the rising stars of the UPA era, Mr. Pilot had a keen sense of caste dynamics in the Hindi heartland, could tie his Rajasthani turban with the same felicity as he would slip into a suit and tie. He continued with the tradition of his father’s annual signature lunch for journalists and assiduously cultivated global and Indian opinion makers. An observation about his father fit well for him too — ‘he made ambition honourable’.

Appointed Rajasthan Congress chief in 2014, Mr. Pilot led from the front and the Congress won the assembly poll in 2018, along with Madhya Pradesh and Chhattisgarh. In the other two States, the party chiefs, Kamal Nath and Bupesh Singh Baghel, became Chief Ministers, but Rajasthan took a different turn. Most MLAs supported Mr. Gehlot. Mr. Gandhi had grand plans for a transition in the party, from the old guard to the younger generation, but the second consecutive Lok Sabha defeat in 2019 derailed him. He threw in the towel and all his comrades were left to fend for themselves. It was at this point that Mr. Pilot was required to rework his plans and ambitions. The failure to do that may be proving costly for Mr. Pilot.

New-gen BTech courses from this year on