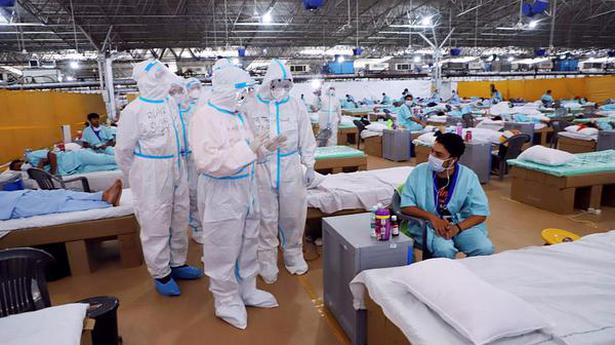 Union Health Minister Harsh Vardhan visited and reviewed the Sardar Patel COVID Care Centre (SPCCC) here on Sunday and said that the SPCCC is part of the “coordinated efforts of the Centre and the Delhi government to bolster the containment measures”.

“The healthcare facility follows naturopathy and protocols of Ayurveda for boosting immunity of the in-patients at the centre. They are given Ayurvedic kadha in the morning followed by meals as advised by dieticians and the day ends with milk with turmeric,” noted a release issued by the Health Ministry.

The Ministry added that a unique feature of the Centre is that it has been backed by the community and donors, in kind, donation and support through beds, oxygen cylinders etc.

“Out of the 10,200 proposed beds, 2,000 are functional. There are 88 enclosures each with 100-116 bed capacity with two enclosures supervised by one nursing station. Currently, the SPCCC is ready with 20 enclosures and 10 nursing stations. Also, 10% of the beds comprise the Dedicated COVID Health Centre (DCHC) with oxygen support. As on date, 123 patients are admitted, out of which 5 patients with co-morbidities have been shifted to hospitals for tertiary care,” noted Mr. Vardhan.

The healthcare facility also has in-house psychological counselling and psychiatry services provided by NIMHANS-trained counsellors along with meditation and yoga sessions for the patients.

“India’s clinical protocol has focused on early detection through widespread testing, surveillance, prompt triaging and clinical management of cases. This has resulted in one of the lowest fatality rates of 2.66%. Our success can be seen in the recovery rate which is almost 63%, with more than 5.3 lakh recoveries,” said the Minister.

The Minister added that as we proceed into Unlock 2.0, it is critical to ensure that all of us rely on the “social vaccine – ‘Do Gaj ki Doori’”.