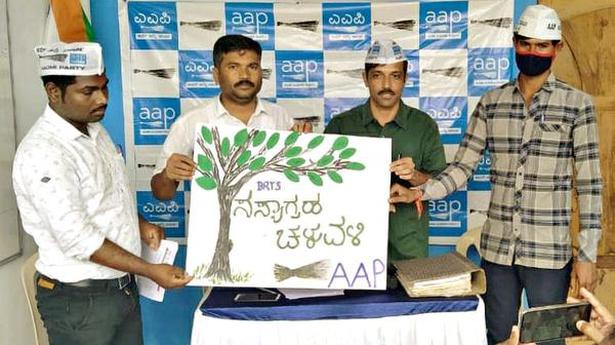 Condemning the apathy and failure of the Hubballi Dharwad Bus Rapid Transit System (HD-BRTS) Company Ltd. in taking up the plantation programme along the BRTS corridor, Aam Admi Party (AAP) has decided to launch ‘Sasyagraha’ campaign from August 23.

Addressing presspersons on Friday, Dharwad president of AAP Santosh Naragund and District Committee member Vikas Soppin said that the party along with other organisations would launch the campaign seeking planting of 4,000 saplings along the BRTS Corridor from Navanagar Bus Station on Sunday.

Mr. Naragund said that despite opposition, nearly 5,000 trees were felled to facilitate the ₹1,200 crore BRTS project which had been implemented under the Sustainable Urban Transport Project funded by the World Bank. “When the Ministry of Environment, Forest and Climate Change approved the project in 2011, it had clearly issued a direction that on either side of the BRTS corridor, a sapling should be planted at every 10 metres. However, BRTS officials have not followed the direction so far,” he said. He added that BRTS authorities were apathetic towards the environment and when asked the about the plantation offered vague answers and listed paucity of funds as the reason for not taking up plantation.

Mr. Naragund said that while the elected representatives of the twin cities were making tall claims about developing Hubballi-Dharwad as ‘city of the future’, they also should not forget the large scale felling of trees for the project. “From 2012, various organisations have submitted memoranda to the HDBRTS company seeking plantation of saplings amounting to ten times of the trees felled for the project. However even after getting the Vice President of India for inaugurating the project, the authorities have failed to do their basic duty towards the environment”, he said.

Mr. Soppin said that to urge the authorities to launch plantation programme to plant 4,000 saplings along the corridor, AAP would be launching the ‘Sasyagraha’ campaign by planting saplings along the median near Navanagar BRTS Bus Station on Sunday at 11 a.m. AAP would urge environmental activists, citizens and various organisations to join hands in the campaign, he said.

A year on, the rains are back to haunt this homeless...