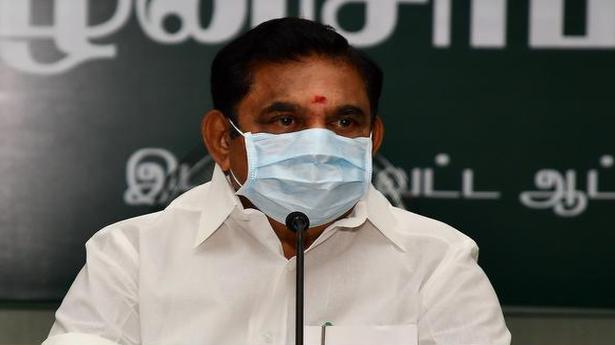 The Tamil Nadu government has decided to hand over to the CBI the probe into the recent deaths of a father and son — Jayaraj and J. Benicks — at Sattankulam, allegedly due to torture in police custody, Chief Minister Edappadi K. Palaniswami said in Salem on Sunday.

The government will inform the Madras High Court (Madurai Bench) of its decision when the case related to the deaths of the two men is taken up for hearing.

In a related development, Sridhar, Inspector of Sattankulam Police Station, where the father and son were allegedly subjected to third degree assault, was on Sunday suspended from service pending an inquiry into the case.

The Chief Minister told journalists that Jayaraj and Benicks, who were running a mobile shop at Sattankulam, Thoothukudi, were arrested and remanded in judicial custody at Kovilpatti sub-jail following an issue regarding closing their shop [during the ongoing COVID-19 lockdown] and they died later at Kovilpatti hospital.

“The Madurai bench of Madras High Court has taken suo moto cognisance of the deaths and the government has decided to hand over the case to the CBI for probe. When the case is taken up for hearing, the government will inform the court about this decision and it will be handed over to the CBI with the court’s permission,” Mr Palaniswami explained.

Asked if he has advised the police on avoiding such incidents in future, the Chief Minister said, “I have already advised the police to behave cordially with the public and traders and take necessary legal action if there are any issues. I have advised police not to cause any unnecessary trouble to the public.”

Sources in Thoothukudi said on instructions from the government, Inspector Sridhar was placed under suspension and Bernard Xavier of Kanniyakumari district has been posted as Inspector of Sattankulam Police Station with immediate effect. Mr. Sridhar was earlier shifted from the station but kept on compulsory wait. Earlier the government had suspended two Sub-Inspectors from the station — Balakrishnan and Raghuganesan — and had initiated a departmental inquiry against two head constables Muthuraj and Murugan.