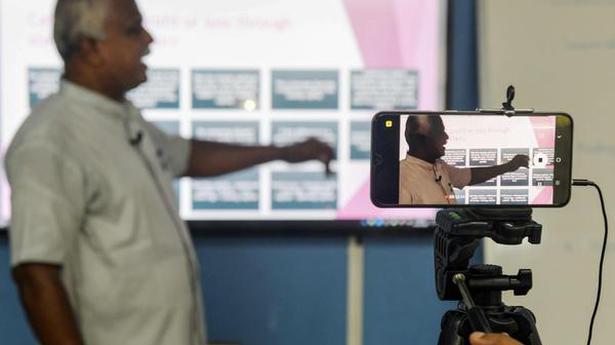 Having announced that classes will be telecast for students of government schools on television channels, the School Education Department is currently in the process of designing and shooting video lessons.

An official from the department said that for classes 2 to 10, video lessons were being designed and shot. “We have roped in senior teachers for videos that are being recorded, following which they will also be vetted by other subject teachers before they are telecast. Apart from Kalvi TV, we are also partially tying up with a few private channels which will telecast the lessons,” he said.

The schedule for the telecast and the lessons is to be announced after the Chief Minister inaugurates the initiative. A teacher from a government school said that they have been informed that the classes will be telecast from 9 a.m. onwards till around 5 p.m. at different timings.

“Since students of class 12 have laptops, pre-recorded video lessons which are already available with the Department will be given to them. The lessons will be transferred to our school servers in the hi-tech labs and when students come to collect their books, they have been instructed to download the videos on their laptops,” the official said.

P.K. Ilamaran, president, Tamil Nadu Teachers Association, said that while they welcomed the telecast of classes on television channels, the government should make an announcement soon on the reduction of syllabus. “With schools not reopening any time soon, at least a 40% syllabus reduction should be considered,” he said.

While the CBSE has announced a 30% syllabus reduction for classes 9 to 12, teachers are hoping that a similar reduction is announced for State board students as well, since the distribution of textbooks is about to begin from the coming week. Schools are planning to distribute the textbooks for class 12 (Plus Two) and class 10 students first, and then go on to the other classes.