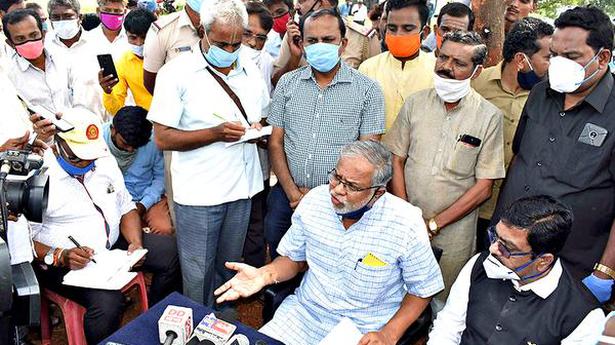 Earlier in the day, the Minister paid visits to various government schools and took stock of the amenities in place.

Dismissing rumours on the reopening of schools that were indefinitely shut after the outbreak of COVID-19, Minister for Primary and Secondary Education S Suresh Kumar has said that the government has not yet decided on the issue. He was speaking to mediapersons in Bidar on Tuesday.

“The State government has not decided the date for reopening schools. There is no possibility of reopening them shortly. Parents, therefore, need not worry about the safety of their children in view of the pandemic. The well-being of our children is our top priority. People need not get confused and panic. There are complaints that the inordinate delay in school-reopening results in increased cases of child marriages. We have also taken this aspect seriously. We are closely watching this and collecting data. After taking opinion from all stakeholders, the government would decide on it. There is no hurry in reopening schools,” he said.

Earlier in the day, the Minister paid visits to various government schools and took stock of the amenities in place. In some schools, he found that they did not have proper buildings, drinking water and toilet facilities and directed the officials to identify all such schools that are lacking basic amenities and submit a report.

“Aravind Arali, a member of the Legislative Council had, in the Legislative Council, said that the schools in Bidar did not have basic facilities. I have, therefore, undertaken a Bidar district tour to have first-hand information at the ground level. I will take stringent action against the officials who have given permission to run these schools without basic facilities,” he said.