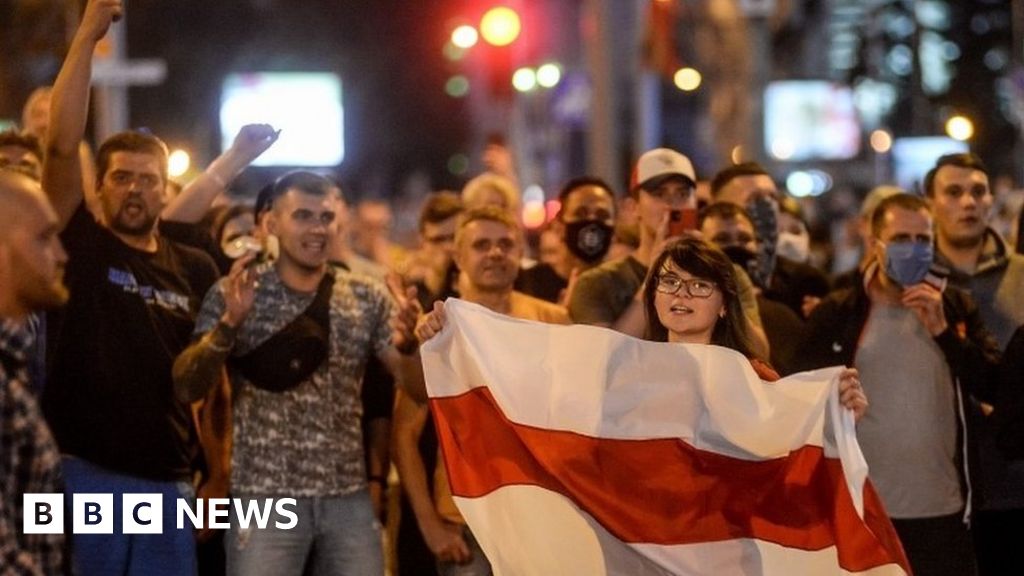 Officials say one demonstrator died when an explosive device went off in his hands – the first confirmed fatality since the clashes began.

His main rival Svetlana Tikhanovskaya refused to accept the results, saying she was the real winner.

A lack of scrutiny – no observers were present – has led to allegations of widespread vote-rigging in the poll.

The election was held amid growing frustration at Mr Lukashenko’s leadership, with opposition rallies attracting large crowds. The preceding days saw a crackdown on activists and journalists.

Mr Lukashenko, in power since 1994, has described opposition supporters as “sheep” controlled from abroad, and vowed not to allow the country to be torn apart.

He won 80.23% of the vote, according to election officials, with Ms Tikhanovskaya receiving 9.9%.

Ms Tikhanovskaya entered the election in place of her jailed husband and went on to lead large opposition rallies.

What’s the latest from Minsk?

Polish-based broadcaster Belsat TV aired footage of the police charging into the crowds.

A number of people were arrested. One journalist was injured, her colleagues and eyewitnesses said.

Later on Monday, the interior ministry said a protester died when he “tried to throw an unidentified explosive device at members of law enforcement”.

“It exploded in his hand,” the ministry said in a statement.

Protests were also being held in other Belarusian cities.

The internet, which was “significantly disrupted” on election day, continued to be mostly unavailable for a second day, according to online monitor NetBlocks.

What did Ms Tikhanovskaya say?

The opposition candidate said that the authorities should think about how to peacefully hand over power.

“We have seen that the authorities are trying to hold on to their positions by force,” she said.

“No matter how much we asked authorities not to turn on their own people, we were not listened to.”

Her campaign said it would challenge “numerous falsifications” in the vote.

“The election results announced by the Central Electoral Commission do not correspond to reality and completely contradict common sense,” her spokeswoman Anna Krasulina said.

But Mr Lukashenko vowed to stay in control.

“Our response will be robust,” he said. “We will not allow the country to be torn apart.”

What has the international reaction been?

Russian President Vladimir Putin congratulated his Belarusian counterpart on his victory, despite friction over accusations of a Russian plot, which Mr Lukashenko has tried to link to the opposition.

The leaders of China and several former Soviet nations have sent messages of support.

But the US said it was “deeply concerned” by the election and urged the government to “respect the right to peacefully assemble and to refrain from the use of force”.

European Commission President Ursula von der Leyen called for the election results to be published, saying harassment and repression had no place in Europe.

Individual EU countries expressed support for the demonstrators, and neighbouring Ukraine’s President Volodymyr Zelensky said doubts over the election were “a direct road to violence, conflict and growing public outcry”.

In the last vote in 2015, he was declared winner with 83.5% of the vote. There were no serious challengers and election observers reported problems in the counting and tabulation of votes.

The campaign saw the rise of Ms Tikhanovskaya, 37, a former teacher who became a stay-at-home mother until she was thrust into the political spotlight.

After her husband was arrested and blocked from registering for the vote, she stepped in to take his place.

Anger towards Mr Lukashenko’s government has been in part fuelled by its response to coronavirus.

The president has downplayed the outbreak, advising citizens to drink vodka and use saunas to fight the disease.