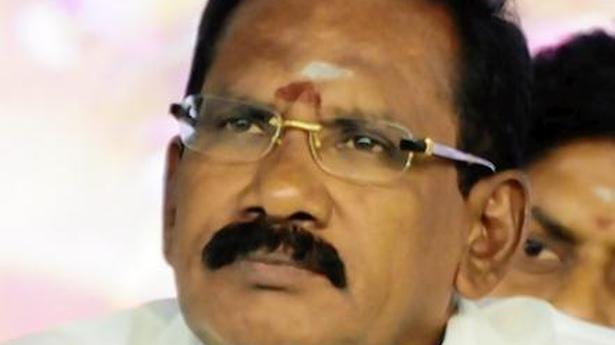 Tamil Nadu Minister for Co-operation Sellur K. Raju on Friday became the third member of the Edappadi K. Palaniswami Cabinet to test positive for COVID-19. He has been admitted to a private hospital in the city.

While Electricity Minister P. Thangamani tested positive on July 8, Higher Education Minister K.P. Anbalagan was infected last month. Four legislators each from the AIADMK and the DMK have also tested positive so far.

Sources said Mr. Raju had accompanied his wife who had tested positive four days ago. He got tested on Thursday, and the result returned positive. His wife, meanwhile, developed complications because of pre-existing health issues and required intensive treatment.

In a tweet, Deputy Chief Minister O. Panneerselvam wished Mr. Raju a speedy recovery and appealed to those in public life to be careful while doing their duty.

Union Health Minister Harsh Vardhan had a detailed conversation on the phone with Tamil Nadu Health Minister C. Vijayabaskar on the situation. Noting that Chennai was still a hotspot though the situation had improved, Dr. Vardhan said the sudden increase in cases in rural areas of the State was a matter of concern.

In a tweet, he said he had advised the State to increase testing and adopt other containment strategies. The State is focusing on lowering the death rate through early diagnosis. It has deployed 350 mobile fever clinics and screened 35,000 to 40,000 persons daily in Chennai. The mortality rate is low at 1.39%. He also posted data on COVID-19 and medical equipment/medicines in the State.

In his tweet, Dr. Vijayabaskar said Dr. Vardhan appreciated the State government’s aggressive testing strategy and preventive measures. He also assured the State of support from the Centre.

First person: ‘Volunteering and motivational videos helped me through those lonely days and nights with COVID-19’