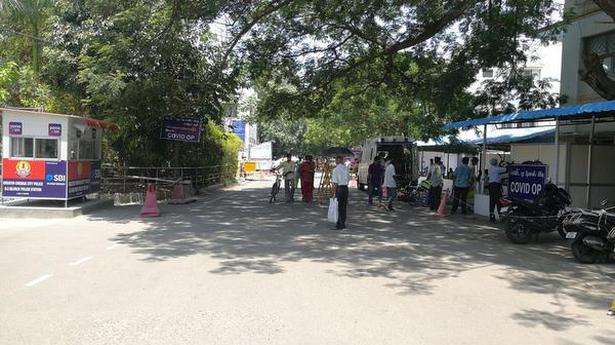 A 74-year-old resident of Alandur, who is believed to have tested positive for COVID-19, has been missing for more than a fortnight, even as his son Manivannan is desperately searching for him in the city.

Adikesavulu, a resident of Muthial Reddy street, Alandur, was taken for a COVID-19 test in Ekkatuthangal on June 9. He was reportedly taken in an ambulance along with a few COVID-19 positive patients on June 11 to Government Kilpauk Medical College Hospital, from where he has gone missing.

Mr. Manivannan said his family was informed that his father had tested positive, by the Chennai Corporation Sanitary Inspector of Divison 161 (Alandur zone), and that the senior citizen was being taken to Government Kilpauk Hospital for treatment.

He said: “As I was busy with the rituals of my grandmother’s death ceremony, I was not able to visit my father the next day. But when I enquired a few days later regarding where I could hand over my father’s clothes with the Sanitary Inspector (SI), the Corporation official informed me that my father was doing fine and that the hospital authorities were taking good care of him.”

Mr. Manivannan visited the hospital on June 15, and enquired with the hospital authorities regarding his father’s health and was shocked when he was informed that no such person was admitted at the hospital. Immediately, he went to the St. Thomas Mount Police Station to give a ‘man missing’ complaint but the police official informed him that the police complaint could not be taken, as his father had gone missing in Kilpauk and directed him to file a complaint at the Kilpauk Police Station.

He said that special teams have been formed to trace COVID-19 patients going missing from hospitals. “The teams are headed by sub-inspectors and have four constables including women. Once a patient goes missing they coordinate with other police stations to trace them. Most often the patients who run away are found at a relative’s house as they do not want to stay in the hospital, due to fear,” added the police officer.

The officer said that a cabin, with air-coolers, has been set up at the entrance to the COVID-19 ward. “The policemen feel safer sitting inside the cabin and they keep track of people going inside and leaving the ward. They also keep making announcements about safety measures through the public address system,” he said. Around 20 policemen, with PPE, have also been deployed in the hospital premises to prevent COVID-19 positive patients from leaving without being properly discharged, he said.