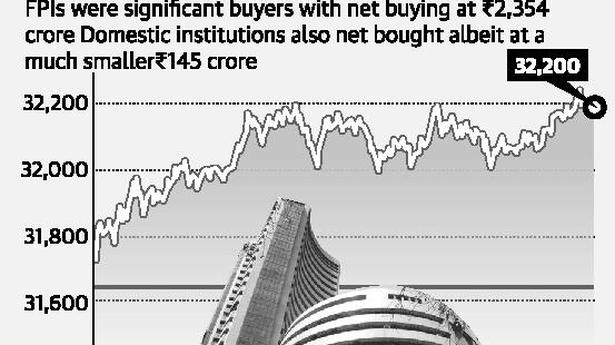 Indian equity benchmarks rose for the second straight session on Thursday with the benchmark Sensex closing above the 32,000-mark as banking and financials continued to witness buying interest.

Market participants attributed the rally to short covering — Thursday was the expiry of derivative contracts — and a positive trend in most of the Asian markets.

“Importantly, Nifty has managed to surpass its immediate and crucial hurdle at 9,450.

“So, it may be heading towards the 9,650-9,750 levels. And, we feel banking and financials will continue to play a critical role,” added Mr. Mishra.

The overall market breadth was also strong with more than 1,500 stocks that gained as against 816 that declined.

Domestic institutions were also net buyers albeit at a much smaller level of ₹145 crore.

Among the Asian markets, the benchmarks of Japan, Indonesia, China, Australia, Malaysia and Philippines all gained on Thursday.