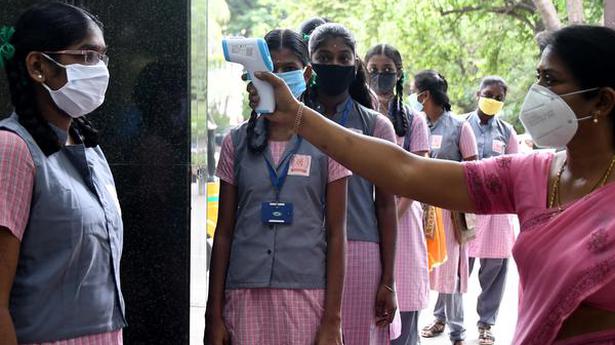 With schools remaining shut since March, teachers say they are concerned about class 12 students in particular, losing touch with their subjects

The State government’s decision to put on hold the government order permitting students of classes 10 to 12 to visit their schools for guidance sessions, will be a setback for senior students who are preparing to take up the board exams next year, private school administrators argue.

“Even if not regularly, students of classes 10 and 12 would have greatly benefited from at least being able to visit their schools in small batches twice a week. With schools remaining shut since March, we are concerned about class 12 students in particular losing touch with their subjects,” said K.R. Nandhakumar, State general secretary, Tamil Nadu Nursery Primary Matriculation and Higher Secondary Schools Association.

Several schools which had originally scheduled online exams in October before their term break, will now go ahead with them.

“When the announcement was initially made and we spoke to parents, many from Class 12 were ready to send their children for guidance sessions every week. We are concerned mainly about how the academic calender of the class 12 students will shape up- since they have competitive exams to prepare for as well, and there is no clarity yet on their syllabus reduction,” said N. Vijayan, patron, Kancheepuram district Self-Financing Schools Association.

For its affiliated schools, the Central Board of Secondary Education (CBSE), announced a 30% reduction in syllabus for classes 9 to 12 back in July. The board released the revised syllabus for each subject and CBSE schools then analysed them and framed an academic plan accordingly.

However, in Tamil Nadu, while School Education Minister K.A. Sengottaiyan announced that there would be a 40% reduction in syllabus, there is no clarity yet on the specifics of this.

Schools which started online classes as early as June are still waiting for details regarding this to plan their academic calender better for classes 10 and 12 in particular.

The government order had stated that students could be allowed to visit the schools only after obtaining consent from their parents or guardian. Raising concerns about this, the Tamil Nadu Student Parent Welfare Association had earlier last week submitted a representation to the State government. “We questioned why the onus of the safety of the child should fall on the parent and this might lead to schools not strictly enforcing safety precautions in place,” said S. Arumainathan, president of the association. He said that members of the association felt that it would be better if the State government reopened schools after assessing the situation better and ensuring that it was completely safe for the students.