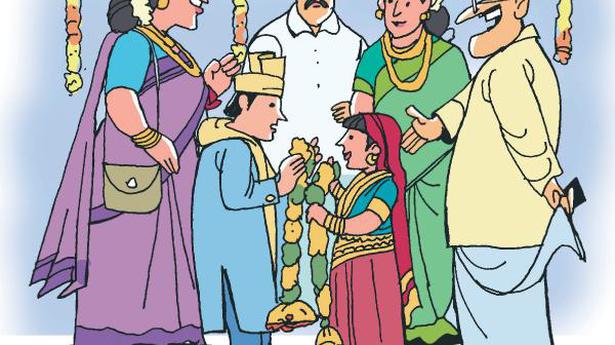 A sharp rise in child marriages has been reported during the COVID-19 lockdown and the subsequent two months, with officials of the Women and Child Development Department stumbling upon over 100 such instances in Mysuru district alone between mid-March and July.

Though the officials claimed they had averted most of the child marriages after receiving tip-offs, a follow-up by the Karnataka State Commission for Protection of Child Rights (KSCPCR) has revealed that most of the child brides have been reunited with grooms, notwithstanding the undertakings submitted by their parents about the cancellation of the marriages.

Member of the commission Parashurama M.L. told The Hindu that they received information about 108 child marriages, which had been reportedly averted.

“We visited 12 houses for a follow-up and found that the child brides were living in the houses of their husbands,” he said. We asked how could the parents, who claimed to have cancelled the marriages, send the minor children away, thus making a mockery of the law,” he said.

The brides in almost all the cases were aged between 14 and 17 and were from the rural parts of the district.

“If 108 instances of child marriage had come to the notice of the authorities, one can only imagine how many more have taken place secretly,” Mr Parashurama said. The commission has sought details of such instances reported from across the State during the lockdown, he said.

He said the parents had taken advantage of lax monitoring during the lockdown when officials of various departments and the police were deployed for COVID-19 duties. Schools and colleges also remained closed for an extended period, making it virtually impossible to monitor the attendance of girls. “The parents made use of these changes to secretly marry their under-aged children,” Mr. Parashuram said.

Meanwhile, officials of the department said they had received a total of 64 complaints of child marriages between mid-March, when the lockdown was first declared, till the end of May, besides another 44 during June and July.

Admitting that these figures were almost double those reported last year in the same period, Mysuru District Child Protection Officer S. Diwakar said they were, however, able to stop most of the marriages after receiving a tip-off. “We managed stop many despite difficulties in arranging officials and transportation to different places during the lockdown. In some cases, we had reached after the marriages had taken place. We have booked cases in such instances and are following it up,” he said.

With regard to the commission’s contention about parents reuniting the children, after giving an undertaking to the authorities that they had cancelled their marriages, Mr. Diwakar said the officials were collecting more information and evidence to register FIRs against the parents.