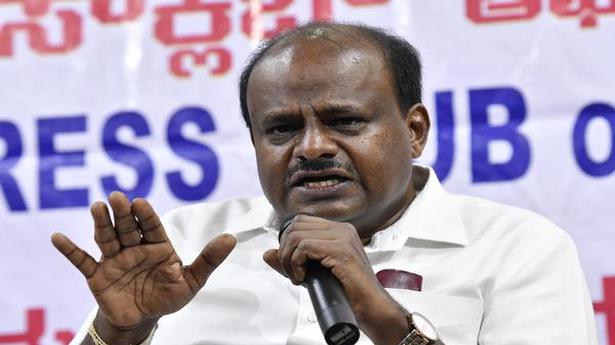 Instead of sealing a few areas, the entire capital city should be shut down for 20 days in view of the rising COVID-19 cases, former Karnataka Chief Minister H.D. Kumaraswamy said on June 23. In a series of tweets, the JD(S) leader said sealing some areas would not serve any purpose and that weaker sections of the society should be taken care of immediately.

“Stop playing with human lives. It will not serve any purpose to seal a few areas. If you care for the human lives in Bengaluru, shut down the city totally for 20 days. Else, Bengaluru will become another Brazil. People’s lives are more important than the economy,” Mr. Kumaraswamy tweeted.

Mere announcement of relief package by the State government for drivers, weavers, washermen and other sections was not enough, he said, askinf the government it to immediately supply groceries to the weaker sections and transfer at least ₹5,000 to the 50 lakh workers.

“Mere announcement of the package will not be sufficient. It should be implemented immediately. The government should not sit idle by showing a rosy picture,” he tweeted.

The Karnataka government on June 22 decided to seal five places in the city from where the maximum number of coronavirus cases were reported. Chief Minister B.S. Yediyurappa took the decision at a meeting with ministers and officials.

Mr. Yediyurappa had expressed dissatisfaction over people “misusing” the relaxation after the two-month lockdown. He had also blamed inter-State travellers as well as those who violated quarantine rules, instructing officials to initiate police cases against rules violators.

Karnataka reported 249 new COVID-19 cases and five fatalities on June 22, taking the total tally of infections in the State to 9,399 and the death toll to 142. Of the five dead, three were from Bengaluru urban and one each from Ramanagara and Ballari.

Among the districts from where the new cases were reported, Bengaluru urban accounted for 126, followed by Kalaburagi-27, Vijayapura-15, Udupi-14, Dakshina Kannada-12, Davangere-9, six each from Uttara Kannada and Bagalkote and five each from Bidar and Chikkamagaluru.