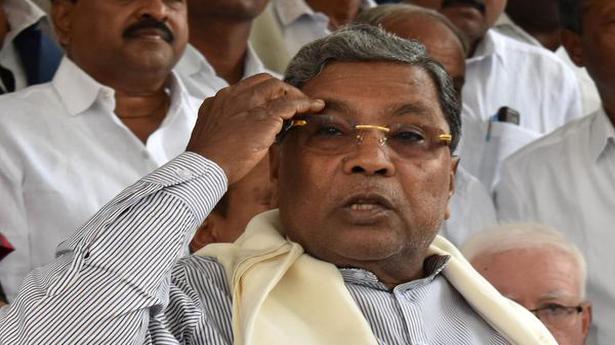 Former Chief Minister and Leader of the Opposition Siddaramaiah has claimed that a few BJP MLAs in the State met him and shared their “dissatisfaction” over the functioning of the B.S. Yediyurappa government.

Mr. Siddaramaiah’s comments assume significance in the wake of talks of dissident activity within the BJP following recent meetings by a section of senior party legislators over the selection of candidates for the upcoming Rajya Sabha and Legislative Council elections. He said some legislators had shared their discontent on the functioning of “de jure Chief Minister” (Mr. Yediyurappa) and “de facto Chief Minister” (Mr. Yediyurappa’s son B.Y. Vijayendra) in the State.

“People say Mr. Vijayendra is working as the unconstitutional Chief Minister; we are not saying it. Mr. Yediyurappa is Chief Minister only for namesake, it is Mr. Vijayendra who clears things,” he alleged. “Several disgruntled BJP legislators met me and shared their discontent.”

Participating in a function at Koppal on Wednesday, Mr. Siddaramaiah said the Congress would not interfere in the functioning of the BJP and the BJP government would fall on its own following discontent.

Reacting to this, the BJP claimed that the Congress leader was indulging in “diversionary tactics” and there was no evidence to substantiate his claim of BJP MLAs meeting him.