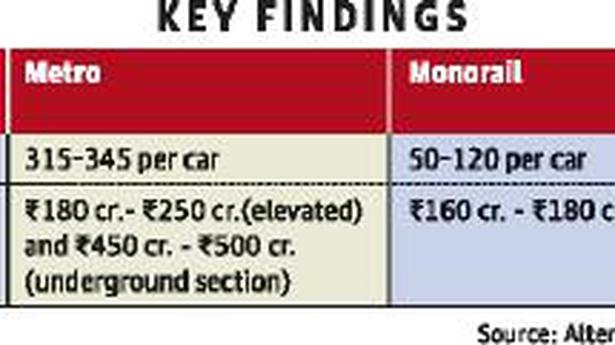 A six-car metro system has emerged as the most viable mass transport system to connect the Kempegowda International Airport (KIA) with Silk Board, according to a study conducted by Bangalore Metro Rail Corporation Ltd. (BMRCL).

The study on the 17-km ORR line (K.R. Puram to Silk Board) states that around 4.5 lakh employees are working in tech parks and other companies on the corridor. “It is estimated that in the next four years, an additional 30 million square feet would be available for occupancy, which in turn projects 8 lakh working population by 2021. With immense growth in intra-city traffic, the ORR is under tremendous pressure with high congestion index manifested in low speeds and high travel times. With rapid urbanisation, in most of the stretches of the ORR, the existing traffic volumes are far higher than the intended design of 5,400 PCUs (passenger car units),” it states.

The report analyses that required travel demand for the ORR corridor is 33,709 PHPDT (peak hour peak directional traffic) by 2041 and states that the BRTS, Metro Lite, and Monorail cannot meet them.

“Metro rail system is a medium-capacity transit system having the passenger throughput between 20,000 PHPDT and 60,000 PHPDT, while the required travel demand for this corridor is 33,709 PHPDT, which clearly indicates that the metro system can easily fulfil the required travel demand for this corridor. This system is more familiar with Indian conditions and many cities are having this system. The rolling stock requirement can be met within India since a number of companies are having manufacturing bases in India. This system offers interoperability with existing mass transit systems in the city. Hence, the metro rail system is perfectly fit for this corridor,” states the report.

On Heavy Metro system, the report states that though the passenger throughput up to 90,000 PHPDT, it does not suit the corridor as the system will be underutilised. It has also got the disadvantages of higher land take, heavier civil structures, and heavy cost, states the report.

Reasoning why the KIA needs the mass transit system to the KIA, the report states that the corridor carries more than 10,000 PCU in the peak hour, and while the corridor (airport road) itself is not experiencing any congestion, Hebbal, the entry point and the network within the central parts of city are experiencing severe congestion.

The report also states that travel demand to be catered to from K.R. Puram to KIA is 46,252 PHPDT. Like the ORR line, other modes of transport such BRTS, Monorail, and Metro Lite will not be in a position to meet them and Heavy Metro is an expensive project hence not recommended. The study recommends implementation of metro rail projects on this corridor too.

The BMRCL has already completed land acquisition for the ORR line and compensation being distributed for acquisition of properties on airport line.

Manish Sisodia’s condition improves, likely to be shifted out of ICU:...

Serena finds it weird to stay in hotel instead of her...

Sri Lanka Podujana Peramuna | A party for the Rajapaksas