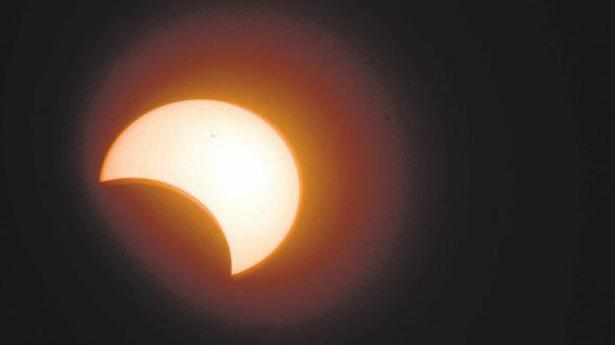 Skygazers in Chennai viewed a partial solar eclipse on Sunday amidst the total lockdown.

Enthusiastic eclipse watchers in the city were disappointed as the Tamil Nadu Science and Technology Centre in Kotturpuram, which makes arrangements for watching the eclipse, was closed because of the lockdown. S. Soundararajaperumal, executive director of the centre, said throughout the State only partial eclipse could be witnessed, with Chennai having 34% visibility and 33% in Vellore district.

The duration of the solar eclipse was more than three hours.

Saravana Manikandan, a photography enthusiast, said he along with his family watched the partial eclipse through a pinhole projector in his Perumbakkam house.

The Centre had issued an advisory to citizens to watch solar eclipse only through binoculars or telescopes as it could harm the eye.