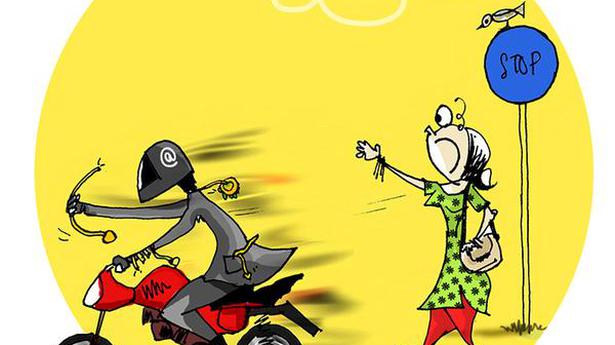 Formerly a team manager, 39-year-old arrested in Bengaluru for involvement in over 30 cases

Investigation into a chain-snatching complaint by an elderly woman has led the police to arrest a software engineer-turned-serial chain snatcher allegedly involved in over 30 cases.

It all started when the accused, Jayakumar, 39, robbed a 60-gram gold chain from an elderly woman while she was on her way to attend a family function on August 13 near Indira circle in Peenya. The accused intercepted her while on the bike and snatched the chain and sped away. In the impact, the victim fell on the ground and sustained severe injuries. She was admitted to a private hospital where she recovered later.

Considering the seriousness of the crime, the Peenya police collected the CCTV camera footage from in and around the areas and managed to identify Jayakumar and arrested him on Monday.

The police said Jayakumar, a native of Krishnagiri in Tamil Nadu and a resident of Banashankari, is an engineering graduate and was the team manager with a major IT company till 2012.

Mudduraj Y., Inspector, Peenya police station, said that Jayakumar was addicted to alcohol and other vices and his salary was not enough to sustain his habits. Unable to attend to work regularly and not getting enough money to meet his expenses, Jayakumar quit the job and joined a gang of notorious habitual offender Karthik and Arun to earn quick money.

The police said the accused has been involved in 22 chain-snatching cases here and 12 in various parts of Tamil Nadu.

In 2019, the Kempegowda Nagar police arrested Jayakumar and remanded him in judicial custody. However, he got out on bail in October 2019 and was absconding since then without attending court hearing.

The police have recovered 15 SIM cards from the accused, which he had borrowed from his relatives to use them to hoodwink the police. The accused would change his hideout frequently to avoid the police, Mr. Mudduraj said.

The police tracked him for one month before arresting him.

Special drive against those who do not wear helmet