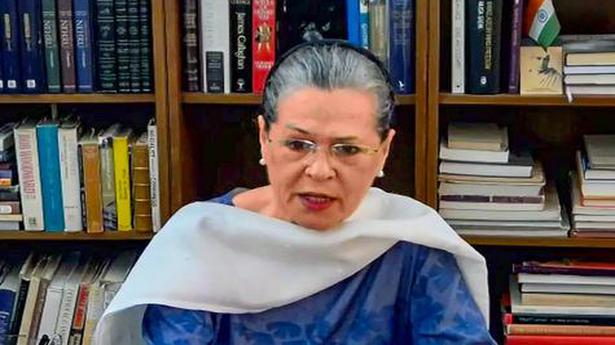 All the Opposition States have been opposing the holding of NEET-JEE exams in the wake of coronavirus pandemic.


Congress president Sonia Gandhi on Wednesday will be interacting with Chief Ministers of Congress-ruled States of Punjab, Rajasthan, Chhattisgarh and Puducherry over the Goods and Services Tax (GST) as well as holding of NEET-JEE exams through video conferencing.

Chief Minister of Maharashtra Uddhav Thackeray as well as Jharkhand Chidd Minister Hemant Sore, States where the Congress is in alliance are also expected to be part of the meet.

All these Opposition States have been opposing the holding of NEET-JEE exams in the wake of coronavirus pandemic.

On the issue of GST, ahead of the Aigust 27 GST Council meeting, the Congress on Tuesday asked the Centre to clear GST dues and compensate the States for the expected loss of 6 lakh crore in revenue.

“We demand the following from the Central government: compensate States for the expected Rs. 6 lakh crore loss. Pay States the compensation of 14% as mandated by the GST Compensation Act and pay it on time. Anything less is a betrayal of the faith of India’s states,”they said.

In a statement, they demanded that the GST compensation cess collection should be extended to ten years.

“Any borrowing that needs to be done to help tide over the COVID crisis must be done by the Central government. It can raise resources at lower cost and can bear the debt burden better than States. Reduce the reliance on cesses and share the revenues fairly,”they added and asserted that the Centre-State fund sharing formula from Finance Commissions becomes a reality.

The Congress leaders argued that independent revenue streams for the State governments that is earned through tax on liquor, petrol, diesel, property sale and purchase have been severely impacted while the expenditure on salaries and pensions remain the same.