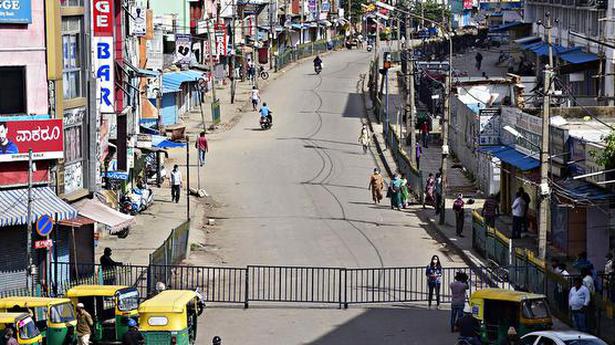 As the city witnesses a spike in COVID-19 cases and the wholesale market hub of the city has been sealed, fears about other crowded spaces, such as markets and malls, turning into hotspots have been aired, making a case for a lockdown.

Though the civic body says a citywide lockdown is ‘unnecessary’ and not on the cards, Minister for Health and Family Welfare B. Sriramulu, on Tuesday, said if the spike doesn’t subside, there is a possibility of another lockdown in the city. The statement came hours after opposition leader and former chief minister H.D. Kumaraswamy tweeted demanding ‘a minimum of 20 days lockdown in the city’ if it did not want to become ‘another Brazil’.

Bruhat Bengaluru Mahanagara Palike (BBMP) Commissioner B.H. Anil Kumar said while the concerns over the recent spike were justifiable, it did not warrant a pan-city lockdown. “The spike can be mostly attributed to people coming from other hotspots. The change in weather has also added to Influenza Like Illness (ILI) cases. An analysis of deaths in the city show most of them had co-morbidities and were hospitalised three or four days after they developed fever. As long as we are able to reduce death rate, we need not fear the numbers,” he argued.

However, public health consultants and other stakeholders point to a sense of complacency that seems to have set in among citizens over the pandemic.

“There seems to be a notion that with the lockdown being lifted, the worst is behind us and we are back to normal. We see people without masks and not maintaining social distancing. We need to correct this immediately,” said Uday Garudachar, BJP MLA from Chickpet, which is going into lockdown.

For instance, many supermarkets and other shops no longer have restrictions on the number of customers being allowed inside simultaneously. The boxes in front of shops for customers to stand in line while maintaining social distancing have not been in use.

The civic commissioner acknowledges this. “We may have lifted the lockdown, but that doesn’t mean we have returned to normalcy. Social distancing norms are key to fighting COVID-19. We will intensify on our awareness campaign and make enforcement more stringent,” he said.

Community medicine practitioner Dr. Sylvia Karpagam said that people’s behaviour is directly linked to the effectiveness of communication from the government.

Dr. K.R. Antony, a public health consultant, argued that there was a strong case to reconsider re-opening of malls, restaurants and crowded marketplaces. “If not a complete shutdown of markets, stringent crowd control is the need of the hour. We need to decentralise the unloading of essential goods, like vegetables and foodgrains, at multiple locations across the city, rather than at one market, like K.R. Market or the APMC yard, to prevent crowding. The Koyambedu market hotspot in Chennai should act as a caution,” he said.

But neither stakeholders of industry nor the civic body agree.

“Malls may be open, but the footfalls are absolutely negligible. How long can we shut down the city? The need of the hour is creating awareness of simple precautions people need to take,” said Mr. Garudachar, who owns three malls in the city.

“Maintaining social distancing is practically impossible in markets. Also, vegetables and foodgrains are coming from across the country, including Maharashtra and Tamil Nadu. We feel like we are sitting on a time bomb. Any breakout will only lead to complete sealing, which will not only affect our livelihoods, but also food security in the city. As self regulation doesn’t work, we want the government to intervene and regulate trade in the yard. We have suggested that shops selling perishable and non-perishable goods open on alternate days for a few hours,” said Ramesh Chandra Lahoti, chairman, APMC Committee, Federation of Karnataka Chamber of Commerce and Industry.

Mr. Anil Kumar said shutting down any market is not being considered. “I will inspect all the major markets and ensure they follow social distancing and other precautionary measures to check the spread of the infection,” he said, adding that despite the recent spike, the situation in the city was under control and it had fared better than any other metro city in the country.