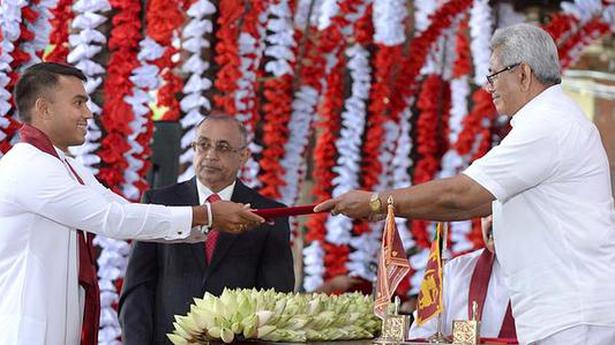 The Cabinet was sworn in at a festive ceremony held at the famed ‘Temple of the Sacred Tooth Relic’ in the central Kandy district. The symbolism, which speaks to the brothers’ core Sinhala-Buddhist support base, was in line with that of President Gotabaya Rajapaksa’s own swearing in ceremony, following his big win in November, near the Ruwanwelisaya, a Buddhist shrine in the historic city of Anuradhapura. On Sunday, Prime Minister Mahinda Rajapaksa took the oath of office at the Kelaniya Raja Maha Vihara, a famous Buddhist temple near Colombo, as senior monks chanted Buddhist prayers.

The newly installed government has three Rajapaksa brothers and two of their sons holding ministerial positions. According to a press release issued by the Presidential Media Division, President Gotabaya Rajapaksa is Minister of Defence, while Prime Minister Mahinda Rajapaksa holds three Ministries — Finance, Cultural Affairs and Urban Development. Their elder brother Chamal Rajapaksa is Cabinet Minister for Irrigation, in addition to being appointed State Minister for Internal Security, Home Affairs and Disaster Management. The Prime Minister’s son and legislator from the southern Hambantota district Namal Rajapaksa has been named Cabinet Minister for Youth and Sports Affairs. His cousin Shasheendra Rajapaksa, son of Mr. Chamal Rajapaksa, is a junior Minister for High Tech Agriculture, the media release said.

Significantly, former President Maithripala Sirisena, who was elected to Parliament from Polonnaruwa district, was not on the list of Ministers.

Meanwhile, some Sri Lankans on social media questioned the legality of President Rajapaksa holding a ministerial portfolio, citing the 19th Amendment, a 2015 legislation that sought to clip the President’s executive powers. When contacted, a senior official in government said it was because the 19th Amendment was “convoluted”, that the current administration wants to repeal it. “The basis for the President assuming charge of the Defence Ministry is Article 4 of our Constitution,” the official told The Hindu, citing the Article which says: “the executive power of the People, including the defence of Sri Lanka, shall be exercised by the President”.

The inaugural session of the new Parliament, Sri Lanka’s 16th, is scheduled on August 20.

Labour scheme in Tibet has echoes of Xinjiang