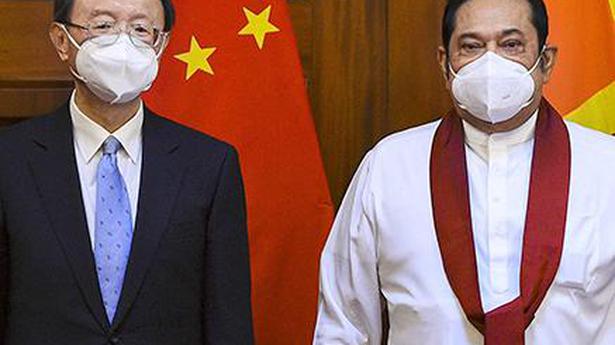 On the heels of a top Chinese delegation’s visit to Sri Lanka, Colombo is negotiating a $500 million loan with Beijing, as it gears up to repay a daunting $4.5 billion of its outstanding debt next year.

The Chinese Embassy tweeted on Sunday, “a $500 million concessional loan” requested by Sri Lanka’s Ministry of Finance to a “China financial institute” is under negotiation, but yet to be finalised. This is in addition to Beijing’s $90 million grant to Sri Lanka, announced days after a Chinese delegation led by Yang Jiechi, a top foreign policy official in the Beijing administration. If sanctioned, the new loan would take Sri Lanka’s total borrowings from China over $1 billion, after the $500 million “urgent financial assistance” that Beijing extended to Colombo in March, to help Sri Lanka cope with the economic impact of the pandemic.

The negotiations come at a time when Sri Lanka is mulling ways to repay its mounting foreign loans. State Minister of Money and Capital Market and State Enterprise Reforms Ajith Nivard Cabraal recently told media that Sri Lanka is “exploring all options”, including the $1 billion currency agreement with India — under negotiation — greater investment in the securities market, bonds, as well as a $700 million syndicated loan from China.

Diplomatic sources in Colombo told The Hindu that the Sri Lankan government did not discuss a possible debt freeze in talks with China’s visiting officials, though Colombo had earlier indicated that it was considering making such a request. “The focus now is on possible investment from China, not just loans,” an official source said, a fortnight after U.S.-based credit rating agency Moody’s downgraded Sri Lanka’s sovereign credit rating by two notches, to the “very high credit risk” category.

Prime Minister Mahinda Rajapaksa, during his visit to New Delhi in February, had sought a debt moratorium from India, to help Sri Lanka tackle the debt repayment schedule. The request, along with President Gotabaya Rajapaksa’s request for a $1 billion currency swap facility, is “being discussed at the official level”, India said, following Prime Minister Narendra Modi’s virtual summit with PM Rajapaksa on September 26. India sanctioned a $15 million grant for the promotion of Buddhist cultural exchanges.

Meanwhile, Sri Lanka is gearing up for yet another likely “high-level visit” later this month, pointing to the heightened geopolitical interest in the strategically located island nation. U.S. Secretary of State Mike Pompeo “is expected to come”, Foreign Secretary Admiral Jayanath Colombage told the Sunday Times. While the U.S. Embassy here told The Hindu “no official visit has been confirmed at this time”, sources mentioned October 27 as the likely date, around the time of the scheduled visit of Mr. Pompeo and U.S. Defence Secretary Mark Esper to India.

News of the visit assumes significance, coming a year after Secretary Pompeo cancelled his scheduled visit to Sri Lanka. Though the Embassy cited “scheduling conflicts” as reason last June, the development coincided with considerable resistance here, to the then proposed ‘Visiting Forces Agreement’ (VFA) with the US. The Rajapaksa administration has also opposed the Millennium Challenge Corporation Agreement — for a $480 million grant — negotiated by the former government.

Further, if Secretary Pompeo visits Sri Lanka, he would be coming weeks after attending the Australia-India-Japan-U.S. Quadrilateral (Quad) Foreign Minister’s meeting in Tokyo. Members of the Quad will be closely watching the Rajapaksa administration’s engagement with Beijing for more reasons than one. Last month, Sri Lanka ordered the termination of a $1.5-billion Japanese-funded light rail project on grounds that it is not a “cost-effective solution” for Colombo and raising “environmental” concerns. Moreover, the East Container Terminal in Colombo that India and Japan agreed to jointly develop with Sri Lanka last year, has run into trouble with workers opposing “foreign involvement” in “national assets.