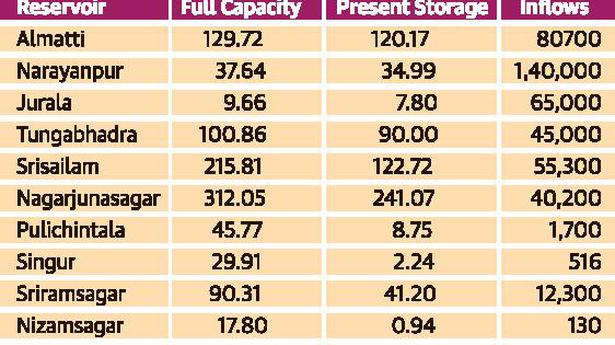 Last year, the reservoir became surplus on Aug. 9 itself


When the discharge of flood started at Jurala project on July 14, initially with power generation and later from the spillway, the chances of Srisailam dam getting filled early this year appeared very high as inflows into the common reservoir of Telangana and Andhra Pradesh commenced more than two weeks early compared to last year.

A month later, the reservoir remains about half empty although the discharge of flood from Jurala with the help of inflows from the upstream have been continuous and going up to over 2 lakh cusecs in between. Last year, Srisailam dam received surplus water within a matter of just 10 days of heavy flood as it received only half (0.5) tmc ft of water in two months till July 31 and the spillway discharge was commenced only August 9 itself.

However, this year drawal of water from Srisailam for supplementation to Nagarjunasagar with power generation by Telangana and drawal for irrigation and drinking needs both by Telangana and Andhra Pradesh left the water storage in the reservoir only half-full. “Against the arrival of about 188.1 tmc ft of flood as on August 13, over 101 tmc ft has been drawn from Srisailam, including about 75 tmc ft for supplementation to Nagarjunasagar and about 25 tmc ft by AP and Telangana for irrigation and drinking needs,” a flood monitoring official told The Hindu.

On the commencement of new water year on June 1, the carry over storage in Srisailam was 35.13 tmc ft and the arrival 188.1 tmc ft of flood so far this season would have made it surplus already as the capacity of the reservoir is 215.81 tmc ft. At 7 p.m. on Thursday, the water storage in Srisailam was 122.72 tmc ft have with inflows of 55,300 cusecs reaching it mostly from Jurala and in small measure of 1,125 cusecs from Handri river.

Meanwhile, heavy rainfall in the catchment areas of Krishna and its tributaries in Karnataka and Maharashtra is still getting sizeable flood to Almatti and Narayanpur allowing heavy flood discharge to Jurala. The Central Water Commission (CWC) has forecast that flood to upstream reservoirs is expected to continue further with 12 cm of rain recorded in Mahabaleshwar and 5.8 cm in Koyna during the 24 hour period till 8.30 a.m. on Thursday. Besides, Hidkal dam across Ghataprabha and Tungabhadra dam in Karnataka are also steadily moving towards surplus position with Hidkal requiring less than 1.5 tmc ft and Tungabhadra needing less than 11 tmc ft water for reaching surplus stage with inflows of over 15,000 cusecs and 45,000 cusecs, respectively.

In the Godavari basin, the flood at Laxmi (Medigadda) barrage was 4.46 lakh cusecs and over 4.3 lakh cusecs was being discharged through 57 gates. At Polavaram in AP, the flood was nearly 6.71 lakh cusecs with several tributaries of Godavari below Kaleshwaram in spate following heavy rains in the catchment areas.

Key takeaways from US Department of Treasury’s FinCen Files – Times...