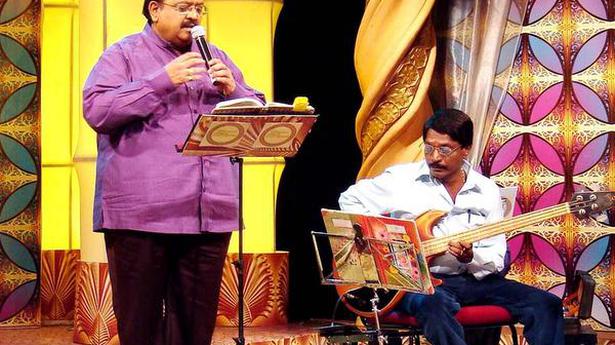 Listening to legendary singer S.P. Balasubrahmanyam perform on stage was a musical delight. Stage shows were an integral part of his music journey and he never stepped onto a stage without rehearsals.

With his incredible versatility, he rendered songs on stage with utmost precision and nurtured budding talent. Organisers of various orchestras who have performed with him for decades recall Balasubrahmanyam as a dedicated singer who respected his co-singers, irrespective of their age.

Recalling that a fund-raiser concert for his hotel management college in 1969 was one of SPB’s early shows, Abaswaram Ramjhi, who has a children’s music troupe Issai Mazhalai, said: “He later sang at my wedding, along with the Pavalar Brothers troupe, in 1977.”

To the organisers of musical orchestras, he was a down-to-earth singer who never missed an opportunity to appreciate singers and musicians. Describing him as a multi-tasker, V. Lakshmanan, one of the founders of Lakshman Sruthi orchestra, said that during a show in Australia, the audience gave a standing ovation for his rendition of song Kadavul amaithu veitha medai that involved a lot of mimicry.

“He introduced me as a mimicry artiste to the audience and gave 20 minutes to perform and I too got a standing ovation. I have marvelled at his ability to do several things simultaneously. Each of the 300 shows we have done with him is a learning experience in nuances in singing. He always advised young singers to never mimic him and focus on the uniqueness of their voice.”

Organisers also recall SPB to be a jovial person who subtly suggested corrections to singers or musicians without hurting them. S. Sankarram, founder of Saadhaga Paravaigal troupe, noted that he was a perfectionist who was particular about language and pronunciation. “He was one of those rare singers who never needed the help of audio technology and could bring in the same feel of playback singing in live shows too. He always insisted on bhaavam to render the right emotions. He was gifted with a youthful, mellifluous voice and sang in the original pitch of the songs till his last breath,” he said.

SPB has helped several musicians throughout his career, said Karthik Jayaraman of Abbas Culturals, one of the many troupes associated with him for over three decades. He has performed Naanum Kamalum for nine years as a tribute to actor Kamal Haasan, and Kalai Vizha was one his last shows in January. He used to rehearse even during breaks in between performances on stage.

Members of the Tamil Nadu Medai Melisai Kalaingargal Sangam, Madurai, organised a live show at Arapalayam on Friday night to pay homage to the singer.

J. B. Vijay, organiser of Tarangini orchestra and the association’s president, said the loss of SPB was a bigger blow to many orchestra singers than the loss of livelihood due to the lockdown. “There is denial among the community about his death as it touched our hearts. Our rendition of his songs has brought us applause on all stages, be it wedding halls, temple festivals or other functions,” he said.

S. Mathiazhagan, who runs Navarasam Isaikulam in Madurai, attributes his personal uplift to SPB and said his voice allowed light music troupes to earn a living.