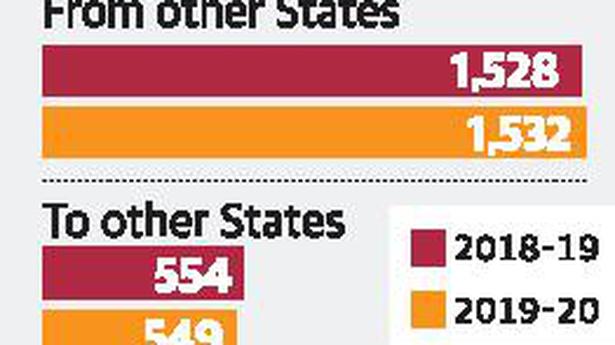 Kerala has a trade deficit of ₹1 lakh crore with the rest of the country, reflecting its small and underdeveloped manufacturing sector.

Import of other State goods is valued at approximately ₹1 trillion (lakh crore) and exports ₹550 million. The multiplier benefit of Kerala’s consumption boom has been reaped by Tamil Nadu and Karnataka.

In 2019-20, firms and economic agents in Kerala generated about 20 million transactions with value of goods traded at ₹4.3 trillion. Of this, about 45% of the goods were traded within Kerala (Kerala sellers to buyers). The rest were shipped from other States, and the all-India GST data were testimony to the commodity movement, Sushil Khanna, Professor, Economics and Finance, IIM Kolkata, and Independent Member, KIIFB, has opined after analysing the GST data.

Kerala’s manufacturing sector, the smallest among the four large Southern States, accounts for 9.5% of the Gross State Domestic Product (GSDP). Manufacturing accounts for 15% of the GSDP in adjoining Karnataka and 20% in Tamil Nadu. High consumption in Kerala has created demand and employment in the neighbouring States, according to Mr. Khanna.

About one-third of ₹1.5 trillion worth of goods imported by Kerala from other States come from Tamil Nadu while Karnataka ships ₹250 billion worth of commodities. Major imports from these States consist of high-value goods such as motorcycle, scooter, electronic goods, light machinery & equipment, and goods.

Other than supply from Central public enterprises in Kochi and suburbs, Mr. Khanna points out that Kerala’s exports mirror those of an underdeveloped agricultural economy.

Last year, Kerala’s exports were of ₹150 billion with agricultural produces such as spices, coir, cashewnut, and marine products occupying roughly half of the table. The analysis has been published in the maiden volume of Kerala Economy published by the Gulati Institute of Finance and Taxation.

Kerala’s international imports were only about ₹150 billion, with machinery and intermediaries such as chemicals, wood pulp, base metals dominating like the rest of the country.

Major markets of Kerala are the United States, Europe, and the Middle East while bulk of its imports are from China and South-East Asia.

COVID-19 has hit intra-State trade centred on large urban centres. Two-thirds of goods movement during the lockdown were within Kerala, while interstate transactions showed a sharp decline. The sharpest decline in economic activity and tax collection came from the cities of Thiruvananthapuram, Alappuzha, Ernakulam, and Kozhikode.

Mr. Khanna says the State has the opportunity to kick-start modern manufacturing with entrepreneurial talent returning from West Asia.

Scientists told to design strategy to save crops