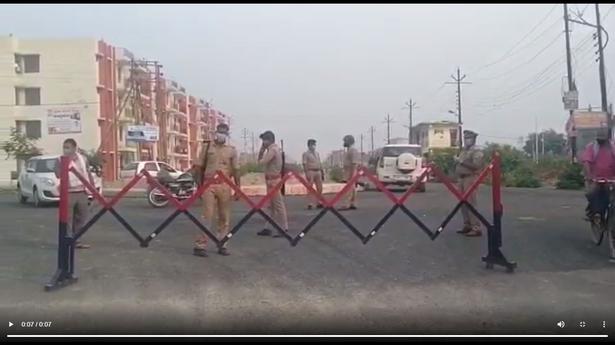 The U.P. Police has suspended from service the Station Officer of Chaubeypur police station in Kanpur district in view of allegations of his involvement in the killing of eight policemen by criminals during a raid to arrest history-sheeter Vikas Dubey.

“In view of the allegations levelled against SO, he has been suspended and all the allegations are being thoroughly looked into,” IG Kanpur Range Mohit Agarwal told reporters in Kanpur.

“If his involvement or that of any other personnel of the police is found in this incident, then they will be sacked from the department and also sent to jail,” he said.

The officer, however, did not disclose the nature of allegations against Vinay Tiwari, the SO of Chaubeypur police station.

Eight police personnel, including a DSP, were gunned down in a village near Kanpur city by the henchmen of a criminal who lost two of them in a firefight later, officials said.

When asked about the demolition of Dubey’s house, the officer said, “Most of the villagers have said that he (Dubey) had grabbed people’s land using muscle power and built his house. He used to extort money from people. It was a hub of crime. There was anger among the local people and there was a feeling of vengeance among them.”

The Kanpur Range IG went on to say that family members of the criminal could have been attacked by the local people but the situation did not go out of control due to police presence.

Earlier during the day Mr. Agarwal told PTI, “To nab Vikas Dubey and his accomplices, as many as 25 teams have been formed which are conducting raids in different districts of the state and other states as well.”

Uttar Pradesh Chief Minister Yogi Adityanath met the family members of the slain policemen on Friday and announced financial assistance of ₹1 crore each to the bereaved families.

Constable Sultan Singh (34), who attained martyrdom along with seven other policemen in an encounter with criminals in Chaubeypur police station area of Kanpur district, was cremated with full honours at his village Boorha Bhojla in Jhansi.

Late on Friday night, Sultan Singh’s body was brought to Jhansi Police Lines, where he was given a guard of honour. Tributes were paid by police officials and district administration officers.

Jhansi Range Inspector General of Police Subhash Baghel, District Magistrate A Vamsi and Senior Superintendent of Police D Pradeep Kumar were among the other officials present at the solemn occasion.

Jhansi DM Vamsi said the financial aid and government job announced by the state government will be given to the family along with every other possible help.

In Kanpur, the last rites of Deputy Superintendent of Police Devendra Mishra (54), who was posted as Circle Officer of Bilhaur, took place on Saturday at Kanpur’s Bhairon Ghat.

Kanpur Additional Director General of Police J N Singh, IG Mohit Agarwal and SSP Dinesh Prabhu were present at the occasion along with other officers of police and district administration.

Kanpur SSP Dinesh Prabhu said, “The martyrdom of Mishra will not be allowed to go in vain.”

In Pratapgarh, the mortal remains of Sub-Inspector Anoop Kumar Singh (32) were consigned to flames on Saturday at his village of Belkhari village. Singh’s body reached the village last night.

MeitY in process of amending IT rules for intermediaries to make them more accountable: Sanjay Dhotre