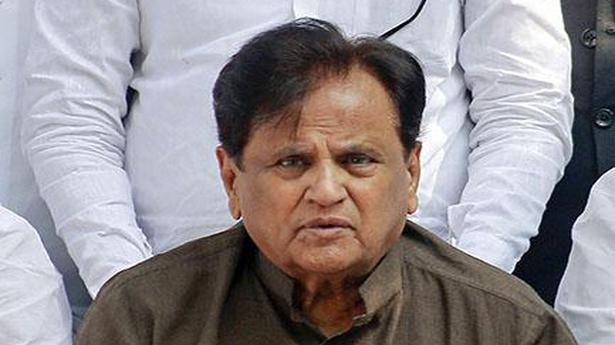 “As Mr. Patel is above 65 years of age, under the COVID-19 guideline, his statement is being recorded under the Prevention of Money Laundering Act at his residence,” said a senior agency official.

In August 2019, the ED had recorded the statements of Mr. Patel’s son in the same case. The agency had also quizzed his son-in-law Irfan Siddique.

The ED investigation is based on one of the FIRs registered by the Central Bureau of Investigation against Sterling Biotech and others in October 2017. One case is related to alleged routing of undeclared funds belonging to unknown Income-Tax Department officials and the other pertains to bank loan defaults to the tune of ₹8,100-crore.

The promoters of Sterling Biotech, including Chetan and Nitin Sandesara, had fled the country along with their family members and till recently, were suspected to be in Albania, where their brother-in-law Hitesh Patel was detained in March last year.

Assets worth over ₹14,500 crore have been attached by the ED in the bank loan case so far. The properties include four Nigeria-based oil rigs and an oil field, several ships listed with Panama authorities, an aircraft registered in the United States and one flat in London.

The oil rigs and oil field were registered in the name of Sterling Energy Exploration Private Co. Limited, while the ships belonged to Atlantic Blue Water Services and the aircraft was in the name of SAIB LLC. All the companies were allegedly controlled by the Sterling Biotech group.

It is alleged that the Sandesaras had taken loans from an Andhra Bank-led consortium and diverted the funds for financing the Nigerian oil business operations and personal use.

The agency found that the promoters had allegedly used their employees’ identities to incorporate about 250 domestic and 96 offshore shell companies in several countries, including the U.S., U.K., United Arab Emirates, British Virgin Islands, Mauritius, Barbados, Panama and Nigeria. These entities were used for money laundering, as alleged.