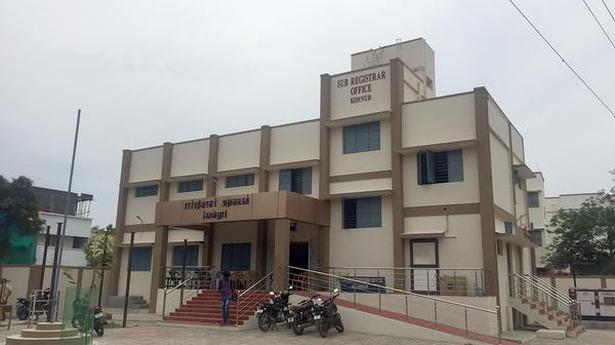 For over a decade, the Konnur sub-registrar office has been something of a challenge to those making a visit. It either had to do with locating it or spending one’s time there or both.

Prior to the lockdown, it was considerably better than before, as the office was located on the first floor of a commercial complex on CTH Road in Villivakkam.

Still, for those unfamiliar with the area, it would have been something of a struggle as there were no signboards directing them to the complex. Besides, the office space inside was cramped with most visitors having to cool their heels in the car park before they were called in to attend to their queries.

Its earlier address was not visitor-friendly: It was found on Fourth Main Road, SIDCO Nagar, off CTH Road in Villivakkam. The office consisted of a single room and a small veranda with concrete slabs on both sides of the veranda for visitors. It functioned from these space for a decade, before being shifted to the commercial complex on CTH Road two years ago.

The plight of applicants visiting the Konnur sub-registrar office has finally come to an end as the office has got its own building — it is now located on the spacious premises behind the Primary Health Care centre (PHC) near the police station on CTH Road in Ambattur.

The Public Works Department (PWD) expedited the construction of Konnur and Ambattur sub registrar offices, both located on the same premises, in the early months of the lockdown. Due to easy movement of raw materials to the work site, the work was completed at least three months ahead of the schedule.

“It’s a great relief for applicants, especially senior citizens as the new office is easily accessible and bus stops also located nearby,” says S. Paramasivan, an applicant from Pattaravakkam near Ambattur.

Every day, on an average, around 40 applicants seeking documents related to land and marriage registration, among others, visit the Konnur SRO after they register their applications online with the Department of Registration.

Located off Chennai-Tiruvallur High (CTH) Road, Konnur SRO was opened in November 1994 after the bifurcation of the Ambattur registration office. The SRO covers areas like Mannurpet, Villivakkam, Nolambur, Mogappair, Kakapallam, Malligaicherry, Konnur and Pattaravakkam. The existing online facility was introduced in the Konnur SRO in 2013 to bring about hassle-free registration of land. At present, the Chennai Region of the Registration Department is divided into three districts — Chennai North, Chennai Central and Chennai South — with each district having on an average 20 sub-registrar offices within its limits.

The new building of Konnur and Ambattur SRO has a large visitors hall, separate cabins for sub-registrar, office and Internet works. Basic facilities like water taps, toilets and adequate seating arrangements with social distancing norms have also been created on the new premises.

However, applicants express worry that the vast open space within the new premises may get flooded during rains as the sandy floor of the premises is a few feet below the level of CTH Road.