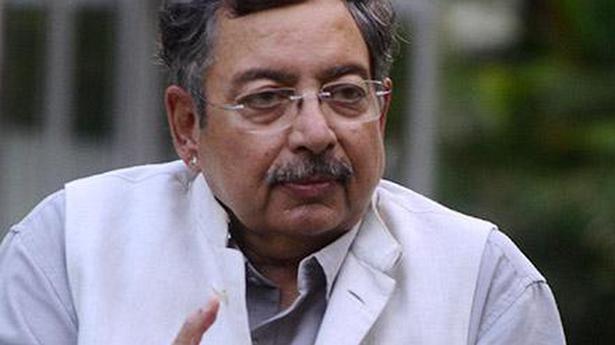 A three-judge Bench of the Supreme Court will assemble on Sunday to hear an urgent plea made by Padma Shri awardee and senior journalist Vinod Dua to quash a “bogus” FIR registered by the Himachal Pradesh police accusing him of sedition.

The Himachal Pradesh police had appeared at Mr. Dua’s residence on June 12 and ordered him to be present at the Kumarsain police station, at least a 20-hour drive from Delhi, at 10 a.m. the next day (June 13).

June 12 was the day when the Delhi High Court stayed an earlier “bald and frivolous” FIR registered by the Delhi police against Mr. Dua for his telecast comments on the northeast Delhi riots and the COVID-19 pandemic. The Himachal Pradesh police made their presence known to Mr. Dua shortly after the High Court’s stay order.

“It is rather astonishing since the police station is 20 hours away from Delhi and they were here in 12 hours,” Mr. Dua said. His pleas to the Himachal Pradesh police to join the probe through emails or online were met with silence. Mr. Dua also expressed apprehensions about travelling during the pandemic as he had co-morbidities.

In his letter to the Supreme Court, pleading for an urgent hearing, Mr. Dua, represented by senior advocate Vikas Singh and advocate Nitin Saluja, pointed out that Himachal Pradesh has institutional quarantine for 15 days for people coming from the red zones. The police insisted on his appearance knowing well that Delhi was categorised as a red zone and he would not be able to be present in the police station at the designated time.

“There is a recent trend against the media where State governments that do not find a particular telecast to be in sync with their political ideologies register FIRs against persons of the media primarily to harass them and to intimidate them so that they succumb to the line of the State or else face the music at the hands of the police,” Mr. Dua said.

Mr. Dua also sought a direction that no FIR be registered against journalists with at least 10 years of standing unless cleared by a committee constituted by the State governments.

This committee should comprise the Chief Justice of the High Court concerned or a judge designated by the Chief Justice, the Leader of the Oppostion and the State Home Minister, the petition said.